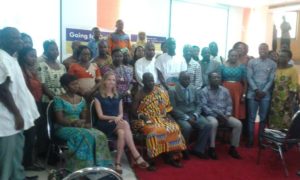 Going for Gold, a women empowerment programme that aims at working towards women living in and around artisanal and Small-Scale Gold Mines in Ghana and Tanzania, has been launched in Accra.

The partnership programme, which consists of Simavi, Solidaridad and Healthy Entrepreneurs, was in collaboration with the Dutch Ministry of Foreign Affairs.

The five-year programme, which comes at a total cost of four million Euros, is being funded by the Dutch as part of efforts to increase opportunities for women.

Speaking on the theme:”Women’s Economic Empowerment in and around Gold Mines,” Mr Isaac Gyamfi, the Regional Director of Solidaridad West Africa, said for the next five years, partners would be working in carefully selected Small-Scale Gold Mines in the Western Region to improve working conditions for women within the mines.

“We will also be working closely with women in Small-Scale Gold Mining communities to improve on their status and abilities to engage in economic activities, increase their sexual and reproductive health rights knowledge.

“Through this we will create an environment in which communities, health workers and authorities will recognise women’s health rights,” he said.

Mr Gyamfi expressed happiness about Solidaridad’s collaboration with other agencies especially when the objectives of the programme fitted into their work ethic as well as aligning fully into Solidaridad’s strategic goals in the Region.

Ms Renatu Douwes, the Programmes Manager of Simavi Ghana Office, said the outcome of the programme would increase the abilities of women where their economic opportunities would be extensive.

She added that the initiative would also help in the formation of women’s savings group where women would be empowered economically and work on their rights.

Ms Douwes noted that the three partners would work both at the mining sector and at the community levels to ensure the empowerment in beneficiaries working conditions.

On the selection Criteria, Mr Yaw Britwum Opoku of Solidaridad, explained that only licensed Small-Scale mines with a minimum life span of five years were selected, adding that “Mining mine management being willing to invest in the programme by subscribing to standards is also a criteria”, he said.

Addressing stakeholders at the launch, Mr Simon Atebia, the Technical Director of the Ministry of Lands and Natural Resources, challenged partners to demonstrate a visible impact on the lives of the beneficiaries.

“The huge investment being made by the Going for Gold programme on a Small-Scale mining sector will be meaningless unless it demonstrates a visible impact on the lives of the beneficiaries,” he said.

Mr Atebia commended partners for the laudable initiative that would empower women in the mining sector and also open up opportunities for them to actively participate in the decision making process of the sector.

He pledged Government’s commitment to promote responsible small-scale mining as well as support the implementation of the Going for Gold programme.

Mrs Sabia Kpekata, the Programmes Officer of the Ministry of Gender, Children and Social Protection, said the programme had come on board timely and would improve the capacity building of women in the mining communities.

“This initiative will also improve the working conditions of women in the sector ,” she said.

Mrs Kpekata who admitted the challenges that confronted women in the mining sector over the years, called for collaborative efforts to curb the problem that had persisted through the reform laws, social norms and institutions that had inhibited women’s participation, productivity and development.

Nana Atta Brempong III, the Chief of Bompieso, said the initiative would concientise as well broaden the vision of women.