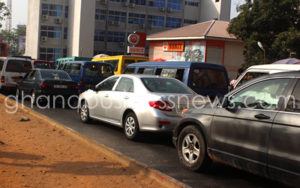 The California Energy Commission (CEC) in the United States has announced plans to utilise energy generated from standstill traffic.

The CEC, which is investing $2 million in a new pilot programme, will study whether or not piezo-electric technology can be used to turn some of the most congested freeways in the country into a useful alternative energy resource.

His was one of the highlights of the UNFCCC COP22 conference which ended in Marrakech, Morocco, recently and made available to the Ghana News Agency.

Piezo-electric technology which converts vibrations into electric pulses, is already utilised on a small scale in objects such as electric guitars, sonar and microphones.

It intended to harness this concept on a larger scale on Los Angeles’ famously gridlocked freeways.

The study will show how small piezo-electric crystals, which generate energy when compressed, can produce electricity for the grid if installed under asphalt.

The statement said as the vehicles roll over highways embedded with these crystals, an electric current is created from the mechanical stress which can then be harvested to energize the grid.

Scientists already know the technology works but the state needs to figure out whether it can produce high enough returns without costing too much.

It said vehicles on the freeways already generate huge amounts of mechanical energy but much of it is lost to heat and friction.

Scientists have estimated that the energy generated from a 10-mile stretch of four-lane roadway could power the entire city of Burbank, which has a population of 105,000 people.

The long-term goal is to produce 50 per cent of California electricity with renewable energy by 2030. The state is currently on target to reach 25 per cent by the end of the year, according to the Energy Commission.

Mike Gravely, CEC’s Deputy Division Chief of Energy Research and Development, said: “It’s not hard to see the opportunity in California…It’s an energy that’s created but is just currently lost in vibration.”

Paul Bunje, a scientist at a Los Angeles-based non-profit organization that funds technological developments, and former Founding Director of UCLA’s Center for Climate Change Solutions, said: “No longer is driving just the act of using energy. May be, it’s also part of the process of generating it.”