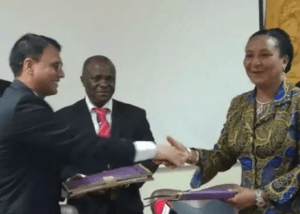 Ghana has signed two separate loan agreements with the Export Import Bank of India, totalling $422.87 million for financing the construction of a railway line and a sugarcane development and irrigation project.

The first agreement of $398.33 million buyers credit will be used to finance the construction of 84.8 kilometre – Tema to Akosombo railway line while $24.54 million will go into a sugarcane development and irrigation project.

Deputy Finance Minister Mrs Mona Quartey signed the agreement on behalf of Ghana while Mr Pushpesh Tyagi, a representative of Exim Bank of India initialled for the company.

Mrs Quartey said the agreements marked another milestone in the process that would lead to a significant improvement in the transport sector, especially the link between Tema port to the Lake Transport Network as well as provide enough raw material for the sugar factory at Komenda.

Mrs Quartey said the implementation of the project would link the Tema port to the lake transport network, especially the North-South movement over a distance of about 400 kilometres and open up the lake to the transportation of not only fuel and cement but also transit containerised cargo and agricultural produce from the SADA enclave and Afram Plains to the port of Tema and other destinations.

“The railway link will provide a cheaper, reliable and alternative means for passengers who are not served by the road transport system in the corridor and the construction, operations and maintenance of the Railway Infrastructure will provide direct and indirect employment to a number of Ghanaians,” she said.

The $24.54 million for the Sugarcane development and Irrigation Project is to be used to cultivate a land of acreage of 1,700 will be cultivated to produce 102,000 tonnes of sugarcane to feed the Komenda sugar factory with raw material.

On his part, Mr Pushpesh Tyagi underscored the importance of the trade relations between Ghana and India.

He said Indian through the Exim Bank had supported Ghana with concessional and commercial facilities to undertake various projects, including the Komenda Sugar Factory.

Mr Tyagi said the Tema to Akosombo project to be undertaken by Afcons Infrastructure Limited of India, would provide a major link to Mali, Burkina Faso and Niger for their transit goods.

Ghanaian players miss out on Africa Player of the Year award