IPP promises to win 30% votes for NPP in Volta South 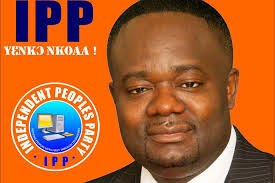 The leader of the Independent People’s Party (IPP) Mr Kofi Akpaloo has promised to win 30 per cent of votes in Volta South for the New Patriotic Party (NPP) in the upcoming 2016 general elections.

In an interview with an Accra-based radio Station Neat FM monitored by ghanabusinessnews.com, he said that he together with his party members have resolved to join the NPP after they were disqualified from contesting the general elections.

“Nana Akuffo Addo called me on phone and asked that we join his party since we have been disqualified so I communicated it to the other party members and we all agreed to join the NPP,” he explained.

“This gesture from the leader of the NPP shows how humble he is. He is not proud as some people perceive him to be. So yesterday we met party members at a hotel at East Legon and agreed to fully support the NPP and after that, we will re-structure our party,” he adds.

When asked by the presenter of the show whether they have been paid some money to join the NPP, Mr Apaloo quickly responded: “We have not been paid anything. It is simply about the love we have for our country and we also have a lot of similarities in our manifestos with regards to job creation and training the youth in information and communication technology (ICT).”

“I have already brought in four Arabs to survey the Keta area to create jobs which can employ about seven thousand people and this will only be realised if we joined forces with the NPP to create more jobs,” he said.

“I promise Nana Addo 30 per cent votes from the Volta South in this year’s election because I am moving there to work tediously for three weeks to garner massive votes for the party,” he added.

The IPP is said to be the second party to have openly declared support for the NPP ahead of the 2016 elections. The United Progressive Party (UPP’s) leader, Akwasi Addai Odike was the first.

Pamela Ofori-Boateng
Copyright © 2016 by Creative Imaginations Publicity
All rights reserved. This news item or any portion thereof may not be reproduced or used in any manner whatsoever without the express written permission of the publisher except for the use of brief quotations in reviews.