Business booms at Nkrumah interchange a day after opening 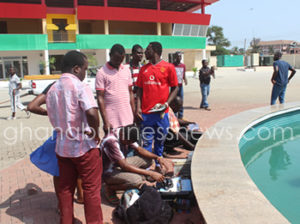 Business is moving on as usual and it’s a scene of people selling their wares under the rather scorching sun around the interchange.

The interchange which also has a memorial garden and water park has become a site of attraction as groups of people enter to see the art works.

As authorities prevented people from entering the memorial garden, we were allowed to enter we introduced ourselves as people from the media.

In an interview with ghanabusinessnews.com, a man who only gave his name as George described the project as a good venture which is going to boost the economy in a way the country has never seen before. “It is a privilege to have such an edifice in our time,” he adds.

Mrs Ankrah a civil servant said “I am surprised people are making noise about this overpass. What is the meaning in this if you use huge sums of money on an overpass and people go hungry? Our economy is in a bad shape and Ghanaians are in jubilation about this project. It is simply not enough in eight years.”

Patience Kukubor, a trader in the area who is originally from the Volta Region expressed her gratitude to the President for  transforming the area to a world class level.”You should be here yesterday for the opening of the over-pass. The whole place looked beautiful with lights everywhere. The president has done very well,” she said.

While some were just admiring the scene, others saw the edifice as a money making venture. Some photographers were seen busily taking pictures of visitors in the garden for a fee.

Speaking to Emmanuel Ashmond, a photographer, he said business was good and he had made some money since he started taking photographs in the morning.

Ernest Quarm, who is also a photographer did not mince words in praising the President for such an initiative. “It is excellent and a privilege to us as Ghanaians to have and to witness this. It has beautified our country as a whole and it is the biggest overpass in West Africa.”

On business, Quarm noted that he had made some money from taking photographs of visitors.

“I have made some cool amount of money but if I had been here early in the morning like my colleagues, I would have made about GH¢200 by now,” he added.

The project, which started on October 28, 2013, was funded by Brazil to help decongest the area of both human and vehicular traffic. The project is estimated at £74 million.

By Pamela Ofori-Boateng
Copyright © 2016 by Creative Imaginations Publicity
All rights reserved. This news item or any portion thereof may not be reproduced or used in any manner whatsoever without the express written permission of the publisher except for the use of brief quotations in reviews.

Mosquitoes can pick up and transmit Zika and chikungunya simultaneously – Study