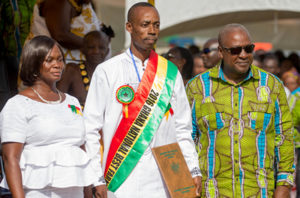 A 42-year-old farmer from the Ejumako-Enyan-Essiam District in the Central Region, Mr Robert Crentsil, was on Friday adjudged the 2016 National Best Farmer.

He was given a $100,000 fully-furnished three-bedroom house constructed by the Agricultural Development Bank (adb), the lead sponsor of the 32nd National Farmers’ Day held in Kintampo in the Brong-Ahafo Region.

Besides large acres of cocoa, rubber and varieties of food crops farms, Mr Crentsil is also into livestock production.

President John Dramani Mahama congratulated the farmers for their hard work saying his government would continue to invest in agriculture to make the industry more lucrative.

He said with the establishment of the farmer services centres across the country, subsistence farmers would have ready access to technical advice and logistics to enable them to engage in commercial farming.

Alhaji Mohammed Muniru Limuna, the Minister of Food and Agriculture (MoFA), said government has put in place several interventions including construction of irrigation facilities and the provision of processing equipment and ware houses.

He said since 2013, the government has imported 891 tractors for farmers to hire, indicating that farmers’ access to financial support had also been improved.

Ghana is on the path to economic prosperity – President Mahama