Over 3,500 security officers to police voting in Brong-Ahafo 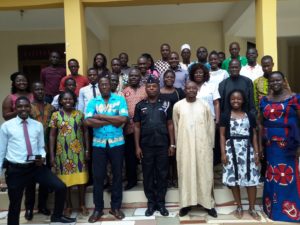 Over 3,500 security officers would be deployed across polling stations in the 29 constituencies in Brong-Ahafo Region on voting day to ensure adequate security protection for everybody.

Deputy Superintendent of police (DSP) Richard Boateng, the Regional Police Legal Officer, said there would also be a stand-by team to swiftly respond to any threat to the peaceful conduct of the polls.

They were aware of the critical nature of the December 07 election and would not be overtaken by events – they were more than prepared to deal decisively with any explosive situation, he added.

He indicated that strong measures had been put in place to stop any trouble makers from having their way.There are 525 hot spots in the region but he gave the assurance that all was going to be smooth and calm.

DSP Boateng was speaking at a two-day training workshop held in Abesim, near Sunyani, for reporters and stringers of the Ghana News Agency (GNA) in five regions – Brong-Ahafo, Ashanti, Northern, Upper East and Upper West.

It is part of the effort to build their capacity to effectively cover the presidential and parliamentary elections.

The workshop comes under the “GNA Tracks Election 2016 Project”, funded by GOIL, the state oil company and CIMG 2015 Petroleum Company of the year.

The project seeks to sensitize the electorate on the various issues raised by political parties, the elections management body and other governance institutions.

It aims at ensuring gender and social inclusion in national politics and to provide voice for the youth, vulnerable groups, opinion leaders and the broader spectrum of the society, and to contribute to the achievement of peaceful polls.

Another objective of the project is to create a platform to dissect the manifestoes of all political parties and provide in-depth analysis of each thematic area to the electorate to enable them to make an informed judgment.

DSP Boateng said the Election Task Force was deepening its conversation with all key actors to prevent any missteps.

He urged the media to be circumspect in their reportage and to make sure that they crosschecked any information with the appropriate authorities to keep the nation calm.

Air France to start direct flights from Accra to Paris