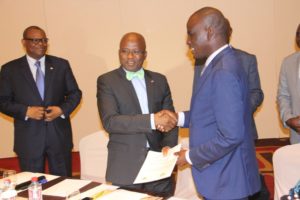 Ghana and La Cote d’Ivoire, on Thursday signed a co-operation agreement to establish a formal basis of co-operation between the two countries on the fight against Cross-Border Child Trafficking and the Worst Form of Child Labour.

The agreement, also aimed at committing the two countries to Common Actions in the agreement towards the fight against Cross-Border Trafficking and the Worst Forms of Child Labour.

The agreement, which was drawn of 30 Protocols, Conventions, Charters and Action Plans on Child Trafficking and Labour, would ensure the protection of the child victim from the time of rescue, sheltering and re-unification.

It is also to ensure the prosecution of perpetrators to serve as deterrents to others, as well as sharing of information including the exposure of the perpetrators from the time they are arrested, prosecuted, and imprisoned.

The agreement is also to ensure that Ghana and Cote d’Ivoire are on this same page so that the perpetrators of trafficking would have nowhere to hide.

In September this year, Ghana’s First Lady, Lordina Mahama and her counterpart in Cote d’Ivoire, Dominique Ouattara initiated the effort in Abidjan to end the menace in the two countries.

Mr Iddrisu on behalf of the Ghana Government commended the Cote d’Ivoire counterparts for their commitment to end child trafficking and any forms of worst labour in the two countries.

He said Ghana has demonstrated its willingness to fight the menace through policies and legislations and the Minister of Gender, Children and Social Protection is currently in Parliament seeking amendment on the Child Act.

He said the government has also given approval for Domestic Workers’ Bill to be laid in Parliament and stressed on the need for the two countries to improve the porousness of the borders to combat the menace.

Mr Iddrisu said the signing ceremony is celebrating a shared vision of the two first ladies in fighting child trafficking and commended them for the initiative.

Mr Dosso on his part, said the two countries were committed to implement the co-operation and stressed the need to establish a tight check on the perpetrators to deal with the phenomenon, which he said is dehumanising.

He noted that the agreement would strengthen their partnership to deal with cross-border trafficking.

Mr Dosso said he was convinced that together they could achieve the goal of eliminating child trafficking and child labour in the two countries.

He, therefore, called on civil society organisations, corporate bodies to collaborate with the governments to own the agreement to achieve its goals.

In a speech read for her, Nana Oye Lithur, Minister of Gender, Children and Social Protection, said the menace is the main challenges of the two countries and expressed the hope that with the involvement of the two First Ladies the efforts would yield positive results.

She said Ghana has strengthen its laws to effectively address cross-border trafficking.

She said trafficking is a distinct violation of the rights of children and must be dealt with to serve as deterrent to others.

Nana Oye Lithur said trafficking in persons are very lucrative business and the perpetrators would do everything to stay in business and urged the security agencies to collaborate with the governments to combat their actions.

She called on neighbouring countries to join the efforts to address the problem on the continent.

Mr Emmanuel Bombade, Deputy Minister of Foreign Affairs and Regional Integration, paid tribute to the two First Ladies for their efforts in bringing the initiative to fruition.

He said issues of child trafficking and worst form of labour needed to be addressed as it destroys the children’s future.

He said the agreement would lead to repatriation of victims in both countries and called on the two parties to be proactive and engage all levels to monitor and apprehend the perpetrators and bring them to book.

He expressed the hope that the co-operation would stand the test of time to see “our children live in conducive environment and to develop themselves”.

Fifty communities in Kwahu Afram Plains South to get electricity