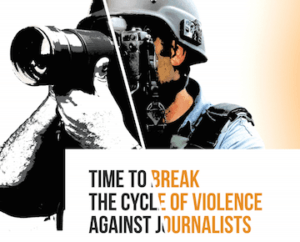 The latest UNESCO report on the safety of journalists shows that some 827 journalists have been killed in the line of duty in the last ten years around the world, with 2015 being the second deadliest after 2012.

The report by the Director-General on the Safety of Journalists and the Danger of Impunity released today November 2, 2016 to mark the International Day to End Impunity for Crimes against Journalists, notes that fewer than one in ten cases of killed journalists is resolved by the judiciary, citing the information received from Member States that have responded to the Director-General’s requests for data about judicial follow up.

The report, which has been published every two years since 2008 with information from member countries of the UNESCO, on the mandate of the International Programme for the Development of Communication (IPDC), indicates that 40 out of 62 countries where journalists have been killed in connection with their work have responded to the Director-General’s request. In 2014, date of the previous report, only 16 out of the 59 countries concerned had provided information.

“Since 2006, the Director-General has cumulatively received information from 59 Member States on 402 killings out of the 827 in the last decade. However, only 63 of these 402 cases have been reported as resolved, representing 16 per cent of the cases for which information was received and only 8 per cent of all killings registered by UNESCO,” it says.

The report also indicates that since 92 per cent of the incidents where violence was used to muzzle free expression and deprive the public of its right to receive information went unpunished, criminals are emboldened to feel that they can get away with murder, literally.

According to the report, working as a journalist continues to remain unacceptably dangerous in all too many regions.