October 5, 2016 General News Comments Off on ECG Board holds meeting over workers’ demonstration 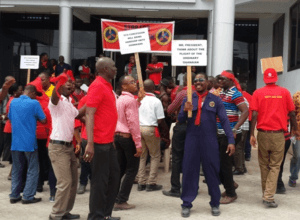 The Board and Management of the Electricity Company of Ghana (ECG) are in a crunch meeting on Tuesday over workers demonstration, against extension of the contract of the Managing Director.

The Public Utility Workers Union (PUWU) of the ECG on Monday, October 3 embarked on a demonstration in protest the extension of the Mr Robert Dwamena, the Managing Director’s tenure of office.

The angry demonstrators shattered glasses in attempt to enter the premises of the company.

The demonstration led to the arrest of Mr Ben Kanoese, the Chairman of the Junior Staff Workers.

A source at the ECG Head Office told the Ghana News Agency on Tuesday that the meeting, which started around 0900 hours is scheduled to end in the afternoon.

Mr Frank Adjetey-Badu, the Secretary of the Junior Staff Workers at the ECG, said the National Executive Committee of PUWU notified the company’s board on September 5, on the need for Mr Dwamena to proceed on leave, upon reaching the compulsory retirement age of 60.

He said the procedure for the alleged contract renewal for the Managing Director was not right.

Mr Adjetey-Badu explained that such favours were not given to Mr Dwamena’s predecessors, hence the need to express their dissatisfaction by the demonstration.