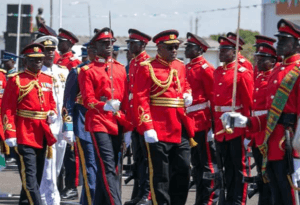 The Ghana Military Academy (GMA) has held its 2016 graduation; during which cadres of the Regular Career Course (RCC) 56 and Short Service Commission/Special Duties Course 54 graduated into fully fledged officers.

The graduating officers for the RCC were 62; which consist of 29 officers from the Ghana Army, three from Benin and two from Guinea.

The rest are 17 Navy and 11 Air Force Officers from the Ghana Armed Forces.

The officers for the Short Service Commission/Special Duties Course 54 were 38, who were all from Ghana Armed Forces.

Their distribution were Army 21, Navy eight and Air force nine.

The Reviewing Officer at the graduating ceremony was President John Dramani Mahama, Commander-in-Chief of the Ghana Armed Forces.

In attendance were service chiefs, senior government officials and members of the diplomatic community.

Major General W. A. Ayamdo, the Commandant of the Military Academy Training Schools (MATS) in his report said the success chalked out by the graduating students was achieved through hard work, perseverance, strength of character and will power.

“The qualities that have been imbibed in you are the basics of what you require as you assume responsibilities as officers,” he stated.

He said discipline is the bedrock without which the military would have nowhere to rest.

Major General Ayamdo said the Ghana Armed Forces had carved an enviable niche for itself both locally and in the international arena.

He said the new officers therefore, have a huge responsibility to zealously guard this hard-earned reputation by being professional, disciplined and also exhibiting exemplary conduct both within and outside the barracks.

“By this, you will not only be carving a good professional image for yourselves, but you will be good ambassadors of the military,” he added.

He said Ghana is a democratic nation, and that it is the duty of the military to support civil authorities to conserve the democracy.

In view of the 2016 general election, Major General urged the officers to be firm and guard against being influenced by family members, friends, individuals and groups for gains that is not in the interest of the nation.

He urged them to be truthful to the oath of loyalty they had sworn on commission.

He hailed the GMA Commander Brigadier General Mike Akpatsu, the officers, men, women and civilian staff of the GMA and all who through hard work and dedication, have contributed towards the training of the  cadets.

The Chief of Defence Staff’s Award, awarded to the Officer Cadet who placed first in order of merit of Short Service Commission/Special Duties Course 54, went to S/CDT D. R. Oppong.

The GMA was established on April 1, 1960 after years of reliance on foreign Military Academies to commission potential Ghanaian Officers for the Ghana Armed Forces.

The mission of GMA is to produce leaders of character for the defence of Ghana.