Ghana earns up to $2.5b from non-traditional exports in 2015 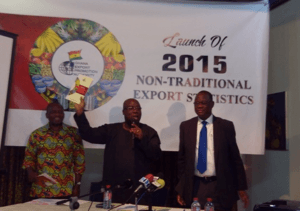 Mr James Tiigah, the Chief Executive Officer of Ghana Exports Promotion Authority (GEPA), told participants at the launch of the 2015 NTEs Performance Results that the marginal increase was mainly due to the increase in agricultural products export, particularly cashew products.

He said earnings from three main sub-sectors: agriculture, processed and semi-processed products as well as handicrafts contributed to the growth.

Export earnings from the agricultural sub-sector, which includes export of cashew nuts, shea nuts and medicinal plants and parts, grew by 16 per cent to $396.91 million in 2015 from $340.68 million in 2014, contributing to 15.74 per cent to total NTE earnings.

During the period, earnings from the processed and semi-processed sub-sector saw a marginal drop to $2.120 billion compared to $2.169 billion in 2014.

Cocoa paste, canned tuna, articles of plastics, cocoa powder and shea oil are among the top 10 leading products which influenced the performance of the sub-sector in the period under review.

The Handicrafts sub-sector saw a 23.05 per cent jump in proceeds to $4.27 million compared to $3.47 million, bringing its contribution to total NTEs to 0.17 per cent.

Among the 10 leading handicraft products were Batik/Tye and Dye, basket ware, hides and skins, beads and painting and drawings.

Mr Tiigah said the non-traditional products were exported to 137 countries with the European Union accounting for 35.84 per cent of the exports.

The ECOWAS Region had 31.59 per cent share of the exports with the rest shared between other countries including Vietnam, India, Turkey, Malaysia, China, and the United Arab Emirates 21.43 per cent.

Other African countries; Sudan, South Africa, Egypt among others 3.62 per cent and other developed countries, include United States, Switzerland, and Japan, 7.52 per cent.

The 10 leading NTE markets in Europe include the Netherlands, United Kingdom and France while Togo is the highest ranked destination for NTEs in the ECOWAS Sub-Region.

Mr Tiigah said GEPA would intensify efforts to tap into the growth potentials in non-traditional exports to the West African Sub-region.

On the National Export Strategy, he said programmes had been undertaken to ensure the implementation of the strategy.

Mr Tiigah called on stakeholders including government agencies and the private sector to increase the level of their collaboration to ensure an even better story next year.

Mr Kobina Ade-Coker, the Chairman of the Governing Council GEPA, expressed the hope that the NTE sector would, in the next few years, contribute at least 30 per cent to the overall export revenue basket of Ghana from the present 19 per cent.

He lauded the contributions of the exporters and stakeholders who had supported and sustained interest in the sector.