Soldiers asked to be professional on December 7 polls

September 1, 2016 General News Comments Off on Soldiers asked to be professional on December 7 polls 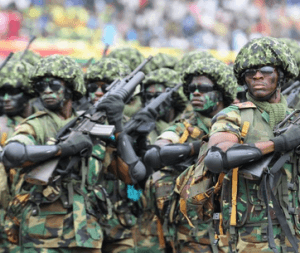 The Ghana Army has been reminded to remain professional and neutral in the discharge of their duties for a peaceful December 7 general election.

“This year is an election year and the political tempo will increase. I entreat all of you to do what we are best known for; professionalism.

”The current peace and stability in the country was the result of the loyalty and steadfastness of soldiers,” Brigadier-General Musa Whajah, the General Officer Commanding the Southern Command said.

He gave the advice when he, on behalf of the Chief of the Army Staff Major-General  Obed Boama Akwa addressed the officers, men and women at a closing ceremony of a six-day ‘Exercise-Thunderbolt 2016’, Inter-Commands/Formation (Inter-Comd/Fmn) shooting competition at the Yaohima Military Shooting Range, near Sunyani.

It was aimed at selecting a formidable team to represent the Army in the forthcoming Inter-Services Shooting Competition to be held at the same venue from September 28 to September 30.

Brig.Gen Whajah said recent events, especially relating to terrorists activities across the sub-region, calls for greater concern and vigilance and therefore cautioned the soldiers to do everything possible to ensure that the nation is not taken by surprise by the machinations of those nation wreckers.

Brig Gen Whajah said in the coming years, the Ghana Army would intensify its drive at improving its human resource base, both qualitatively and quantitatively.

He said already the promulgation process for the approved new structure of the Service is on-going and the designated Northern Command Headquarters in Tamale would soon become fully operational.

Brig-Gen Whajah urged individual shooters selected to represent the Army to train harder to enable the Army to win the September inter-service competition.

The extraordinary marksmanship exhibited by the team led by Sergeant M. Konnie also won them more plaques and certificates than their other counterparts.

The SP SVCS BDE GP was not left out in the medal awards as Captain A.Gamor placed first and collected a trophy in the “Best Individual M16 Riffle Shot” event for his team.

In the individual female division, Sergeant Sarah Darkwa of Central Command won a plaque and certificate for placing first in the “Best Individual Female Shot” event.