August 27, 2016 Sports Comments Off on Attractive prizes at stake for 2016 Millennium Marathon winner 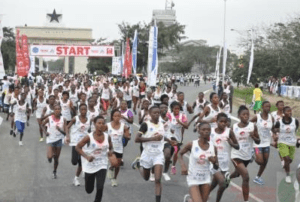 The organisers of the 2016 Millennium Marathon race have announced that the first Ghanaian to cross the finishing line and break last years’ time record will win a brand new Peugeot car and GH¢40,000 and other consolation prizes from sponsors.

The ultimate prize will be contested by athletes in the 21km race and another special 5km fun race category for corporate organisations in a bid to create awareness of a healthy lifestyle.

The International Millennium Marathon, which comes off on Saturday, September 3, is expected to draw about 20,000 participants across the world with two-time Olympic Champion and marathon legend Haile Gebreselassie as race director.

According to the organisers, they wanted the car to be won by a Ghanaian as compared to the maiden edition which saw Ethiopians winning both the male and female categories race.

At a press conference held on Tuesday at the Accra Metropolitan Assembly premises, Ambassador Mr. Ashim Morton, Managing Partner of the Millennium Marathon Sports Company also revealed that, it will include wheel chair racing which offers the athletes to exhibit their skills and talent.

He added that, foreign athletes from Colombia and Kenya are expected to arrive in the country on August 31 and called on athletes and the general public to meet and interact with the finest and best marathon athletes and winners of last year’s at the Accra Sports Stadium same day.

Mr. Morton stated that, professional coaches will give advice and tips on health and training when preparing for the competition and urged the participants to take advantage of the opportunity to exchange ideas from the professionals.

The Chief Inspector of MTTU, Mr. William Kissi said, they are ready to ensure that there is total security regarding the event.

He noted that, all roads on the 21km and 5km routes will be blocked on the day and that, the Ghana Police Service will be at the various road intersections to regulate traffic flow.

The Mayor of Accra, Mr. Alfred Oko Vanderpuje challenged the Ghanaian runners to train well and win the ultimate prize and pledged his outfit’s readiness to support the event to ensure the city is clean.

The marathon starts at the Independence Square through some selected principal streets of Accra.