PBC makes modest profit but no dividend for shareholders

August 25, 2016 General News Comments Off on PBC makes modest profit but no dividend for shareholders 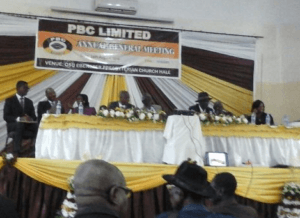 The Produce Buying Company (PBC) Limited recorded a modest net profit of GH¢6.27 million for the 2014/2015 financial year as compared to a net loss of GH¢25.31 million recorded the previous year.

The Board of PBC, however, could not recommend the payment of any dividend as was the case in the 2013/2014 financial year.

At the 15th Annual General Meeting held on Wednesday in Accra, Mr Maxwell Kojo Atta-Krah, the Chief Executive Officer of PBC, attributed the company’s performance to the unfavourable weather conditions that significantly affected the national cocoa output and reduced the quantity of cocoa purchased and delivered by the company in the year under review.

He said the company’s continued reliance on borrowings from the market to supplement funds for purchases presented it with a cost outlay too heavy to bear.

Besides, the need for supplementary funds beyond that from the traditional COCOBOD source continued to place the operations of the company on excessive short term borrowings at high interest charges.

“In the year under review, the company spent 51.2 per cent of its gross operational earning in servicing finance cost,” Mr Atta-Krah said.

He said the general unfavourable economic condition caused by excessive increases in costs of all major operational inputs and logistics was another factor that militated against the smooth operations of the company.

He, therefore, said the raising of the equity capital for the company through a ‘Rights Issue’ or ‘Private Placement’ which had been on the drawing board for a number of years should be pursued to its logical conclusion as the Board of Directors continued to engage the major shareholders on the issue.

He said the revenue for cocoa operations increased from GH¢1.115 billion, an increase of 26.6 per cent due mainly to the increase in producer price of cocoa purchased from GH¢5, 600 per tonnes to GH¢6,800 per tonne in the year under the review.

The Chief Executive Officer said total expenses, excluding financing cost, increased by 34 per cent from GH¢84.263 to GH¢113.751 million, thus the company recorded an operating profit before financing cost of GH¢92.662 million as compared to the previous year’s figure of GH¢34.726 million, an increase of about 167 per cent.

On the outlook for the new financial year, Mr Atta-Krah said the Board of Directors and management would continue to dialogue with the major shareholders to ensure that all outstanding issues relating to Equity Capitalisation were resolved.

He said they would also continue to put in place the needed strategies to improve its operational capacities and efficiency to increase its market share and volume purchases to enhance its revenue and boost its profits levels in the years ahead.

“Again, the company would put in place appropriate strategies to monitor and effectively and efficiently manage the various investments being undertaken to ensure maximum return”, he said.

Captain Kwadjo Adunkwa Butah (Rtd), Board Chairman of PBC, said the newly established Golden Bean Hotel in Kumasi operated through the whole year as a 100 per cent owned subsidiary of the company and it was expected that with positive patronage the end of year result would be profitable.

He said the Shea factory, a potential rich foreign exchange earner for PBC Ltd and a great potential revenue generating outlet, was seriously being worked on to get it into full working order as quickly as possible to add to the fortunes of the company.

Captain Butah said the PBC also provided modest support and donations to various organisations and farmer communities in the course of the year totaling GH¢110, 000, adding that as the company’s earnings improves in subsequent years it would become possible to improve such support to the farmers.

Meanwhile, a section of the minority shareholders who presented a petition at the AGM, called for urgent recapitalisation of the company to enable them to gain some dividends, saying the current situation had led to dwindling in the revenues of shareholders.

Other shareholders also urged management of PBC to increase farming support to farmers, especially cocoa farmers, to entice them to produce their cocoa for the company.

A former Vice-Chancellor of the University of Education, Winneba (UEW), Professor Jophus Anamuah-Mensah has said …