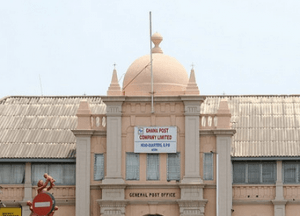 The stamps carry messages of peace and a call to citizens to commit themselves to securing the peace of the nation as Ghana journey into the general election on December 7.

The stamps are to serve as both commemorative artifacts as well as denominative stamps for daily posting of letters.

Launching the stamps, Brigadier General Joseph K. Klobodu (Rtd), Board Chairman of Ghana Post Company Limited said the stamps are being released to support peace before, during and after presidential and parliamentary elections.

He said the images and captions on the stamps talk about the need to sacrifice for peace, justice, fair play, harmony as well as messages of forgiveness and tolerance in the election year and beyond.

He said peace is very essential and at no point in time should Ghanaians overlook its benefits.

“There is therefore the need for each and every one of us to strive and aim at attaining peace in carrying out our daily activities, not only because we have elections before us but also to help promote cohesion and accelerate national development.”

Brigadier-Gen Klobodu said as he served in the Ghana Armed Forces for more than 30 years, he could recall stories and adverse effects of conflicts and civil strife in many countries where he participated in peacekeeping and peace support operations.

He said most of those war afflicted countries had their very promising economies destroyed by conflicts, warning that “Ghana should not and must not be plunged into any such unfortunate situation in the name of consolidating our democratic credentials”.

Brigadier-Gen Klobodu said all indications point to the fact that Ghana is poised to add to its enviable record of organising successful and peaceful elections.

He said all must put their shoulders to the wheel to ensure that the record is kept intact.

He advised the electorate to abide by laid down rules and procedure in order to avoid unnecessary confrontations, which in turn would result in security breaches.

Mr Eric Yao, Managing Director of Ghana Post said his company decided to release the stamp  as part of efforts to promote and sustain peace as the Company as part of Corporate Ghana could only do businesses when the nation was stable and peaceful.

He advised Ghanaians not to take for granted the peace being enjoyed in the country, saying, “we in Ghana cannot afford to sit unconcerned when people make unguarded statements that could incite violence. It is this same silence that drove other countries to war and conflict”.

He urged all to help consolidate and protect the peace in Ghana.

“Ghana Post is very much alive. In a short time to come, the company will be coming out with new and innovative products for our numerous customers. To this we pray for peace, during and after the general election.”

Mr Isaac Riverson, Executive Secretary of the Postal and Courier Services Regulatory Commission said the Post since time immemorial had been used as a medium to call for peace and also communicate the message of the hearts amongst people.

He explained that post offices could not function when there is no peace in the country, regions, districts and local communities where they operate.

“It is only in an atmosphere of peaceful co-existence that we can send a letter that has two hearts to connect in joy.”

He therefore commended Ghana Post for the efforts to publish new stamps aimed at promoting peaceful elections in the country.

Mr Riverson  urged all to spread the message of peace across the country, and refrain from unnecessary comments and arguments that have the potential to divide the country.

Mr Amadu Sulley, Deputy Chairman in charge of Operation at the Electoral Commission commended Ghana Post for its role in supporting peaceful elections while assuring Ghanaians that the EC had put certain mechanism in place to ensure credible and peaceful elections.

He said the EC would never do anything concerning the elections based on its own discretion but the Commission would operate according to the legal framework to ensure accuracy, transparency and free and fair elections.