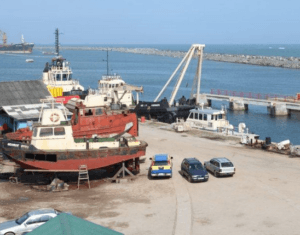 Mr Richard Anamoo, Director General, Ghana Ports and Harbours Authority  (GPHA) has assured workers of the Tema Shipyard and Dry dock Limited that none of them would be laid off.

Mr Anamoo, in an interaction with the Shipyard staff few weeks after government handed over the management of the facility to the GPHA, said “we are not here to lay off workers”.

He said the GPHA would rather concentrate on transforming the Tema Shipyard.

He however charged the workers to “put all hands on deck” in order to transform the facility into a viable business enterprise.

“We all should rise up to the challenge of national demand so that we turn this company into a company that is working and we can be proud of”, he said.

The DG urged the staff to eschew all unproductive attitudes towards work but rather discharge their duties professionally.

He stressed that his administration would not tolerate unprofessional attitudes, warning that such behaviours would be lawfully sanctioned.

Mr Anamoo also called on them to contribute their quota towards the development of the shipyard instead of embarking on unnecessary demonstrations and agitations.

“Let us tell the people of this country that we are not what they think we are, but we are just victims of circumstances and given that opportunity we are ready to turn this place into a viable business enterprise”, he added.

Mr Anamoo reminded workers that they could only be rewarded when the shipyard is revived adding that training programmes would be organized for them to build their capacity.