Informal sector must rise to protect their interests

August 17, 2016 General News Comments Off on Informal sector must rise to protect their interests 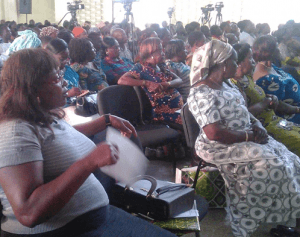 Workers in the informal sector have been urged to come together under a strong union to protect their rights and interests.

Mr. Boakye Dankwa Boadi, Chairman of the Union of Informal Workers Association (UNIWA), said since they constituted the majority of the Ghanaian workforce, it was critical they united to give them a strong voice.

He was contributing to discussions at a forum on the third-tier pension scheme held in Kumasi.

It was organized by the National Pension Regulatory Authority (NPRA) to sensitize and aid traders and other workers in the informal sector in the metropolis to appreciate the need to enroll onto the third-tier pension scheme to give them a more secured future.

Mr Boadi indicated that the interest and concerns of those in sector, especially petty traders, tended to be largely ignored and their rights trampled upon by city authorities.

They are often denied the right to take part in decisions that affect the environment in which they operate – imposition of tariffs and fees as well as unjustifiable ejection from their place of work.

He spoke of the significant contribution they had been making to the growth of the economy by way of tax payments and said it was only fair that they were given their rightful share of state resources to promote their work and enhance their living conditions.

He encouraged them to take advantage of the third-tier pension scheme to assure themselves that they did not become miserable in their old age.

Madam Rosina Akrofi, NPRA Zonal Head for Ashanti and Brong Ahafo, said the third-tier scheme was voluntary and meant to cushion subscribers after they became incapable of continuing to engage in their business as a result of old age.

She urged traders, especially women to take advantage of the scheme and contribute for their future.

Mr. Owusu Afriyie of the Ashanti Regional Secretariat of the Trades Union Congress (TUC) underlined the need for continued education to enable majority of people in the sector to take advantage of it and enroll.