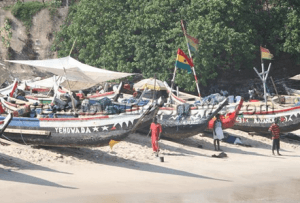 The Fisheries Commission (FC) has announced its intention to embark on a two-month closed season period for fishing trawlers to allow the depleting fish stock to replenish.

During the period that is expected to be operative before the year ends, fishing trawlers would not be allowed to go for fishing expedition, Mr Thomas Insaidoo, the Deputy Director in-charge of Projects of the Commission, announced at Ankobra in the Ellembelle District of the Western Region.

He said this at a “hygienic fish handling campaign” organized by the Daasgift Quality Foundation” a non-governmental organization, for fish mongers and processors in the District.

For the Canoe Fisheries, the Deputy Director said, they are already enjoying a one-day holiday that enables the fishermen to mend their fishing gear and also allow the fish stocks to replenish.

He said fish has the potential to restock itself to breed and produce young ones during the period under consideration and expressed optimism that the fisher folks would respect the “holiday days” directives.

Mr Insaidoo said the FC has put in place appropriate mechanisms for stakeholders including all fisheries associations to sensitize them on the need to take the expected measures on the sustainable fishery management.

Nana Akpoh Kpanyili, chief of Asanda, said there is the need for the fisher folks to strictly observe hygiene in the handling the fish caught as unhygienic methods could contaminate the fish and affect the health of consumers.

He advised people living around coastal communities against defecation at the sea shore in order to improve the environment of the shore.

Nana Egya Kwame MacCharthy, the chief fisherman of Ankobra, appealed to the Ellembelle District Assembly to register the boats of the fishermen to enable them enjoy all the privileges as their colleagues elsewhere.

Mrs Gifty Baaba Asmah, Executive Director of the Daasgift Foundation, said the unhygienic method of handling fish influenced the partnering with other fisheries organizations like the USAID Sustainable Fisheries Management Project (SFMP) to find solutions to the dwindling fish stocks in the sea and its wholesomeness.

“It has, therefore, become expedient to work together to create awareness on the need for an immediate change on how fish is handled right from the net to the plate for enhanced and sustainable livelihoods in fishing communities” she said.