Home / Africa/International / What you need to know about Hungary

What you need to know about Hungary

August 11, 2016 Africa/International Comments Off on What you need to know about Hungary 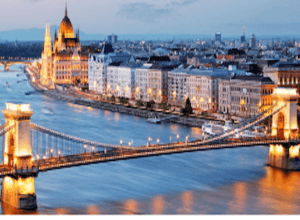 Although Hungary is a landlocked country, it is a land of waters, featuring the largest lake in Europe, the Balaton, and crossed by mighty rivers-Danube and Tisza, which divide and define its regions.

It is a land of great contrasts and in addition, Hungary has more than a thousand thermal water springs for bathing or for relaxation or as part medical treatments.

A profile on Hungary provided by the Ghanaian Embassy in Accra and copied to Ghana News Agency on Thursday said although a small country, it has much to show.

It lies at the heart of Europe, which provides a unique geographical position of transmitting the European heritage and values filtered through a splash of individualism in her language and culture, which is completely different from her neighbours.

It also offers many unique sights and attractions, which could be reached within two and a half hours from most European countries.

The culture of the Hungarian people shows great variety too. Strong traditions and regional specialities have built up in all aspects of life from food to music and dance, from clothing to decor.

These traditional values have been maintained through the ages, though the modern world also has an influence.

The larger cities and particularly the capital, Budapest are powerhouses of ground-breaking innovation, contemporary art and modern music.

Hungary could be reached in many ways. Most international flights come to Budapest Liszt Ferenc Airport, which is served by via conventional and budget airlines.

The capital also has numerous rail connections, and is just three hours drive from Vienna and could be visited as part of a Danube river cruise.

Its service sector accounts for slightly less than two-thirds of the GDP. Within the service sector, the private services (trade, tourism, finance and other economic services) are highly developed.

The transportation sector (with some companies owned by the state and others by private corporations) offers optimum conditions for transit traffic due to Hungary’s favourable geographical location.

The agricultural sector, for which Hungary has especially favourable climate conditions, represents approximately four per cent of the country’s GDP.

In line with international trends, the industrial sector accounts for around one quarter of the country’s GDP.

It has undergone a quantitative and qualitative change in recent years.

Its basic pillars are companies such as Audi, Mercedes Benz, Opel and Suzuki.

Many of the world’s top suppliers are also present in Hungary (Bosch, Bridgestone, Continental, Delphi, Denso, Hankook Tires, Lear, LUK, and Michelin). Some of them have already established Hungarian R&D centres.

Economic growth and equilibrium, have been improving for two years partly due to external growth and EU funding, and partly consumption-boosting fiscal and monetary policies.