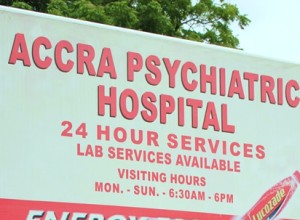 Stakeholders at a forum in Bolgatanga have appealed to Parliament to pass the Legislative Instrument (LI) on Mental Health before it dissolves this year.

The forum was on the theme; “Integrating Mental Health of Children, Youth, Women and Gender Based Rights into ongoing Activities of Civil Society Actors”.

It was funded by the Department for International Development (UKaid), a United Kingdom based charity organisation, and attracted stakeholders including state and non-state actors from the 12 districts of the region.

The participants noted that the passage of the LI would not only make the state to commit more resources to addressing issues relating to mental health, but would ensure that all stakeholders in support of the mentally ill lived up to their tasks and responsibilities.

Per the Mental Health Act, persons with mental illness were supposed to have their separate wards at health facilities but that is not the case now.

The participants complained of shortage of mental health professionals and medicines, and indicated that this compelled most of the patients to resort to spiritual camps for the management of their illness which mostly turned to exacerbate their conditions.

Mr Benard Azure, the Upper East Regional Project Officer of Basic Needs Ghana, who made a presentation on Basic Needs Model for Mental Health and Development, said the organisation, over the years, had worked to ensure that persons with mental illness or epilepsy lived and worked successfully through some remittent support.

He said the NGO had collaborated with the Ghana Health Service, the Ghana Education Service, the Department of Social Welfare and National Lotteries to support persons with mental illness and Epilepsy.

It is also being supported by development partners the European Commission, Canadian Government, Jersey Oversee Aids Commission and DANIDA.

He said under the project, the NGO, through its partners, embarked upon community health outreach programmes, formed school based Mental Health Clubs and Regional Alliance on Mental Health and Development, geared towards preventing stigmatization and providing support for persons with mental illness.

Mr Kumbelim said the objective of the school based Mental Health Clubs was to empower the youth in schools to advocate against stigmatising mentally ill persons and to preach against drug and alcohol abuse in their respective schools, communities and homes.

He said about 80 per cent of mentally ill persons had been restored to normal life and being supported to earn a living.

Mr Victor Asangalisah, a Senior Nursing Officer in charge of the Psychiatry Unit at the Bolgatanga Regional Hospital, attributed causes of mental illness to biological, psychological and environmental factors and said it could affect any person irrespective of one’s status.