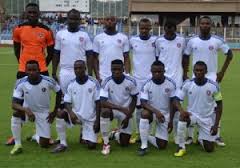 A rejuvenated Bechem United on Sunday booked a ticket to the grand finale of the 2015/2016 MTN FA Cup competition with a 2-0 victory over Wa Rockets in the semi-final encounter at the Baba Yara Sports Stadium, Kumasi.

The first half saw Bechem searching for an early goal but Theophilus Nelson and skipper Cisse Salifu of Rockets made sure their opponents’ attackers were kept at bay, neutralizing most of their dangerous moves in the process, and it came as little surprise with Bechem managing only one shot at target in the first half.

Bechem began the second half more aggressively and dictated the pace of the game, which the First Division side, Rockets found difficult containing the onslaught.

Bechem broke the deadlock on 48 minutes when Hamza Mohammed profited from a defensive blunder to punish the Wa-based club.

Richard Baffoe increased Bechem’s tally to two in the 70th minute, and it was a beautiful goal by all standards.

The goal-scorer intercepted a pass in a Rockets’ swift counter-attack, dribbled past two defenders, and beat the advancing goalie of Rockets.

Bechem will play Okwahu United in the finals, after Okwahu defeated Liberty professional 3-1 on penalties in the final other semi-final game.