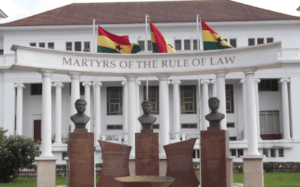 The Supreme Court on Monday convicted two radio panelists and the host of a talk programme ‘Pampaso’ together with the directors of an Accra-based radio station, Montie FM.

However, the court has deferred sentencing to July 27.

The defendants pleaded liable for the charges and asked the court for mercy.

The court granted them self-recognizance bail.

One of the panelists, Alistair apologised to the court for his utterance, saying he did not know what came over him and promised never to make such comments again.

Nana Ato Dadzie, counsel for owners of station pleaded with the court that, they are first time offenders and the court should have mercy on them.

He told the court that the management of the station had put in place measures to avert any such occurrence again.

At the last adjourned date, the defendants contended that they were only served with the summons that morning, hence had not properly prepared to answer the charges against them.

The two panelists, Alistair Nelson and Godwin Ako Gunn, threatened to “finish” the Supreme Court judges if they made any judgment against the Electoral Commission in a court case challenging the validity of the voters’ register, whilst the host of the programme Salifu Maase also known as ‘Mugabe’ was alleged to have urged the panelist on in their attacks on the justices.