Accra signs MoU with Paynesville in Liberia on Resilience Cooperation

July 17, 2016 General News Comments Off on Accra signs MoU with Paynesville in Liberia on Resilience Cooperation 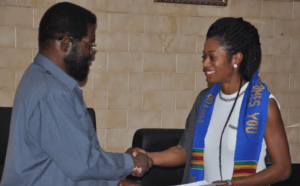 The Accra Metropolitan Assembly (AMA), has signed a Memorandum of Understanding (MoU) on 100 Resilience Cities Project with the City of Paynesville in Liberia on Resilience Cooperation.

The objectives of the MoU is to share resilience innovations and best practices between the two cities, to enable them to become more resilient to social, economic and physical challenges that are a growing part of the 21st century.

The project, which is being pioneered by the Rockefeller Foundation in the United States was designed to help 100 cities around the world to lead in city-wide resilience building efforts to prepare to survive, adapt, and grow in the face of natural and man-made stress and disasters.

Dr Alfred Oko Vanderpuije, the Accra Metropolitan Chief Executive who signed on behalf of the AMA, said Paynesville is one of the newest cities to join the 100 Resilience Cities Global Network, named along with Addis Ababa, Nairobi, Lagos and Cape Town.

He said Accra and Paynesville would facilitate on the basis of equality, mutual benefit and goodwill information sharing to enhance the Resilience Strategy Development and implemented process.

“The leaders and top-level department administrators of both cities would maintain and facilitate open channels of communication to expedite consultation, exchange and cooperation on questions of issues and common concern,” he said.

Madam Cyvette M. Gibson, Mayor of the City of Paynesville in Liberia, who signed on behalf of her city expressed gratitude to the Rockefeller Foundation and the 100 Resilience Cities Project to named her city as part of the final cohort of 37 cities in the world to join the global network.

She said 20 years after the civil crisis the city of Paynesville experienced serious destructions, hence the need to join Accra to share the best practices on sanitation, health, unemployment and other economic challenges of the two cities.

Mr James Ayando, the Accra Chief Resilience Officer, said he needs the support of various departments with the Assembly and other government institutions to develop the resilience strategies within the communities.

The MOU signing was witnessed by Miss Liz Agbor-Tabi, the Associate Director of City and Practice Management at the 100 Resilience Cities Project in the US.