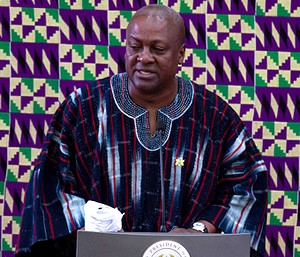 The Minority in Parliament on Tuesday urged President John Dramani Mahama, as a matter of urgency, to appoint a substantive Power Minister to effectively manage the energy challenges of the country.

They said the Ministry is important to the functioning of all critical sectors of the economy and therefore demanded that should be a competent hand to direct  its affairs to mitigate the effects of debilitating power issue.

The Minority’s contention was in response to a communication from the Presidency read on the floor of House by the Speaker, Edward Adjaho, on the nomination of three personalities for consideration as deputy Ministers.

“Let me take this occasion to remind the President that these are deputy ministerial nominations he is offering to us for consideration. There is a key matter which is still outstanding after the sudden transition that affected our own colleague Dr Kwabena Donkor.

“And because of the affliction this nation is facing, wouldn’t it be prudent to have a substantive Minister for Power? Maybe we may remind him that it is still outstanding,” Minority Leader Osei Kyei Mensa-Bonsu said.

But Deputy Majority Leader, Alfred Kwame Agbesi said although the Minority Leader had raised a very relevant issue, he (Minority Leader) should mind his own business.

“I think that he (Minority Leader) has raised a good point but what I want to tell him is that there is a popular saying that “di wu fie asem”, to wit, mind your own business.

The Speaker, after listening to the arguments of the leaders, said he would have ruled them out of order for their comments if they were not leaders.

He however referred the nominations to the Appointments Committee.

Finance Minister Seth Terkper has been supervising the Power Ministry since Dr Donkor resigned last December. He is being assisted by the Deputy Power Minister, John Jinapor.