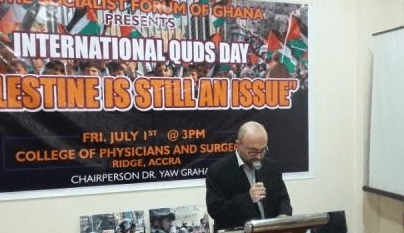 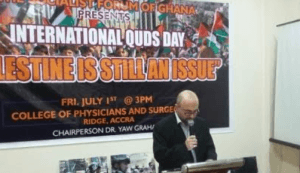 Mr Abdalfatah AL Sattari, the Palestinian Ambassador to Ghana, has called for international support in the wake of the injustice and atrocities being meted out to Palestinians by Israelis to ensure a total liberation.

The Ambassador made the call at the commemoration of the “International Quds Day” in Accra organised by the Socialist Forum of Ghana on the theme: “Palestine is Still an Issue”.

He said the killing of their women and children was enough for the State of Palestine and all that the state needed was to occupy its land in the Middle East.

“We call on the world to provide international support and protection for Palestinians because we want to live in freedom, dignity and in peace in our land like other people of the world, we want to see our children smile like other children in the world,” he said.

The event is usually marked every last Friday of the Ramadan month to show solidarity to all oppressed and suffering people all over the world, especially the Palestinians in the moment of their struggle.

It was attended by representatives of political parties, the Islamic sect, the Rastafarian Council, members of the Palestinian Community in Ghana and students groups who shared solidarity messages in support of Palestine.

Mr Mohammed Soleyani, Iran’s Ambassador to Ghana, prayed that one day Palestinians would celebrate republican status like Ghana does on July 1.

Mr Kwesi Pratt Junior, a member of the Socialist Forum, debunked the notion that the struggle is between Christians and Muslims, saying it is a struggle for national liberation.

He said it was time the campaign was intensified to inform the world to support Palestine to be free.

Professor Edmund Delle, the National Chairman of the Convention People’s Party, said: “We must vow here that when we return next year, we will be celebrating victory.  If one country is not free, then we’re all not free. I declare a total fight for the liberation of Palestine.”

Paa-Quecy Adu, President of National Union of Ghana Students, said to ensure freedom of Palestine, students across the globe must play a pivotal role to achieve it.

He called on students to champion the course of freedom for Palestine to ensure her total development.

The International Quds Day was instituted by the Islamic Republic of Iran in 1979 to express solidarity with the Palestinian people and oppose Israel’s control.

Quds Day is also held in several countries in the Arab and Muslim world with protests against the Israeli occupation of East Jerusalem.

We need participation of religious leaders in development – President