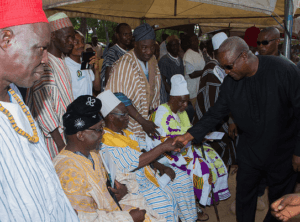 The Upper West Region House of Chiefs, has assured government of its cooperation to maintain peace in the communities in the impending presidential and parliamentary elections.

The House called on political parties, the media, civil society organisations and the international community, to support government’s efforts to secure peace and improve the well being of the people.

The President of the House, Naa Dr Puoure Puobe Chiir, Paramount Chief of the Nandom, gave the assurance at the inauguration Regional Library on Thursday.

President John Dramani Mahama inaugurated the library as part of his two-day tour of the region to account for his stewardship to the people.

The Nandom-Naa also commended government for the provision of small town water systems for 11 communities, extension of rural electrification and the implementation of social interventions in the region to enhance livelihoods of the people.

The House reminded President Mahama about its quest for the University for Development Studies campuses in Wa, Navrongo and Nyankpala to be upgraded to a fully-fledged universities with customised programmes to serve the needs of the respective regions.

Nandom-Naa called on stakeholders to lend their support to the new management of the Wa Polytechnic to improve conditions on campus.

He urged government to assist the school with requisite faculty members, programmes and infrastructure to meet the conversion criteria of a technical university.

Naa Chiir said the Region has the least of tarred roads in Ghana and appealed to government to improve on all major roads linking the districts to Wa, the regional capital.

He however acknowledged that the Wa-Lawra highway road is almost completed while construction works on Tumu-Navrongo and the Wa-Han-Tumu roads are progressing steadily.

He expressed gratitude to President Mahama for making provision of GH₵ 916,175.54 for the completion of the office complex of the House.

On the economy, the House suggested the establishment of sheabutter refinery factory in Wa and shea plantation to serve as a game changer as cash crop for the people.

The House however expressed disappointment at the massive felling of rosewood trees by illegal logging companies, which is having adverse effects on agricultural production.

The chiefs also complained about the felling of economic trees such as shea and dawadawa for charcoal production and government should order a stop to the practice to save the environment from total destruction.