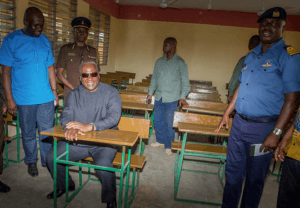 President John Dramani Mahama on Friday inaugurated a 12-unit classroom complex in Wa as part of the “Account for the people tour” in the Upper West Region.

He said more prisons blocks would be built to separate remand prisoners from the convicted ones.

He said work has started on the Accra, while Kumasi and other centres would receive similar blocks in the coming years through the Ghana Education Trust Fund.

The Wa Basic Prisons School complex, which is one of the pilot projects under construction in parts of the country are to be used in educating the prison inmates and children of the officers.

President Mahama who had earlier cut sod for the construction of a Military Garrison in Wa said as the population grows, there is the need to increase staffing of the security agencies to handle security issues.

He said the construction of the Military Garrison in Wa was part of government’s promise to establish Military detachments in all the regions of the country.

He promised to focus on numerous reforms in the Prisons Service in his second term of office and called on the officials of the Ghana Prisons Service to be vigilant in their duties in order not to put the lives of the prisoners in jeopardy.

“The construction of the remand prisons will also fulfill the promise I made after launching “Justice for all prisoners programme last year,” he said.

President Mahama said it is unfair to lump both convicted and remand prisoners together.

He said part of the reforms would include improving educational facilities that would offer technical and vocational skills to inmates to lead useful lives after their release from prison.

“Government will increase budgetary allocation to various prison centres in the country to increase skills training programmes for the inmates to acquire jobs upon their release.”

President Mahama presented assorted food items made up of rice, maize, sugar, cooking oil among others to inmates of the Wa Central Prisons.