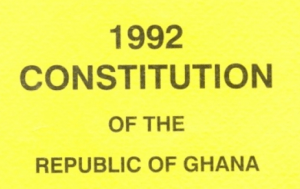 Parliament would next Monday, July 11, solicit public view on portions of the Constitutional (Amendment) Bill, 2016 that would ensure the effective and smooth transition of the Legislature before the expiration of its tenure.

The Bill, which is currently before Parliament, amends Article 112(4) of the 1992 Constitution to make provision for Parliamentary elections to be held well ahead of the expiration of the term of every Parliament to guarantee seamless transition.

A communication issued by the Public Affairs Department of Parliament on Thursday said the Parliament Select Committee on Constitutional, Legal and Parliamentary affairs would hold the public forum in the Committee Rooms 1 and 2 of the new Parliament Office Complex next Monday.

Currently, December 7, is set as the date for the conduct of both Presidential and Parliamentary elections in Ghana, while the swearing-in of a new or continuing government and legislators takes place on January 7 of the of the ensuing year.

The one month period for the transition of one government to another has over the years proved inadequate a time for a smooth handover, particularly, in instances where there is a run-off election as was the case in the 2004 and 2008 elections.

Thus, to ensure that parliamentary elections are held earlier than December 7 of an election year, the Bill seeks to amend the said Article to enable elections to be held on the first Monday of November of every election year.