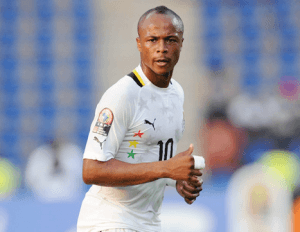 Black stars deputy captain, Andre Ayew has been signed on as the brand ambassador of unibank for the next five years.

The Swansea City player is expected to “use his image and value as a player to help boost the image of the indigenous bank outside the shores of Ghana.”

Speaking at the signing ceremony at Unibank, the Chief Operating Officer of the bank Dr Kwabena Duffuor Jnr. said they are looking forward to a fruitful relationship with the former Marseille playmaker whose values are in line with the bank.

Ayew expressed his delight at becoming the next ambassador saying “Unibank has ambitions and am happy to be part of them. I believe in the same vision and hence the long contract and it is the beginning of a great collaboration.”

The financial details of the contract were not disclosed during the signing, which was witnessed by officials of the award-winning bank and Maya Ayew – mother of the Ayews.

Black Stars captain Asamoah Gyan and former Ghana coach Kwasi Appiah were the previous brand ambassadors of the bank, which is the official sponsor of the four-time African champions.