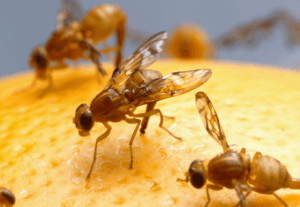 The flies attack the crops by piercing and laying eggs in them with the spots shrinking slightly.

In Afadjato South the infestation has caused mango fruits, oranges and vegetables to get ripe and fall prematurely with worms in them.

Resource-poor and commercial farmers in the district told the Ghana News Agency (GNA) on the sidelines of a Plant Health Rally in the communities that since 2014, they had lost over 70 per cent yield to the attack by the flies.

Thomas Akplu, a farmer at Liati, said despite using pesticides, he could not harvest a single fruit from his garden egg and cabbage farms.

Another farmer, Justine Prica, 54, at Liati Agbonyra said she lost two acres of pepper and okro to the attack by the flies.

Frank Obranie, at Ve-Dafor said he only got shade from mangoes he planted at home because the flies destroyed the fruits in the past two seasons.

Mr Prosper Agbodza, District Crops Officer of the Ministry of Food and Agriculture (MOFA), attributed the situation mainly to lack of farm sanitation and improper disposal of infested fruits.

Mr Patrick Beseh, of the Plant Protection and Regulatory Services Directorate of the Ministry of Food and Agriculture, in charge of the Plant Health Rally, “Plantwise” initiative, advised the farmers to regularly collect fallen fruits and dispose them properly.

He asked them to bury collected fruits to about 30-50 centimeters deep, approximately the length of one cutlass in order to prevent the disease from spreading to other fruits.
Mr Theophilus Zottorgloh, the Volta Regional Deputy Co-ordinator, “Plantwise” initiative, said reports indicate that a good number of farmers had abandoned their farms due to the infestation.

He said the situation had caused some farmers to lose thousands of Ghana cedis affecting the living conditions of thousands of people.
“Plantwise” initiative is under the auspices of Centre for Agriculture and Biosciences, an inter-governmental non-governmental organisation working with agriculture extension officers known under the project as “Plant Doctors” to find solutions to pests and diseases especially reducing yields of resource-poor farmers.