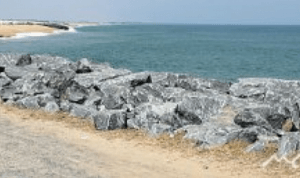 Dr Denis Worlanyo Aheto, a Senior Lecturer at the Department of Fisheries and Aquatic Sciences, University of Cape Coast, has called on stakeholders in the marine industry to come up with proactive measures to reduce climate change effects on coastal lands.

He said most coastlands were suffering from heat waves, tidal waves, storms, flood and rising sea levels due to the effects of climate change.

Dr Aheto made the call at the opening of a two-day training workshop in Cape Coast on: “Coastal Community Vulnerabilities, Hazards and the Need for Coastal Resilience, Hazards and Spatial Planning,” organised by the Sustainable Fisheries and Coastal Management Capacity Building support Project and sponsored by USAID.

The workshop, with special focus on the recent “Tidal waves events along the coast from Keta to Axim,” is being attended by more than 30 participants from the UCC Centre for Coastal Management, University of Ghana and National Disaster Management Organisation (NADMO).

The rest are the Hydrological Services, Environmental Protection Agency, Town and Country Planning as well as community representatives from Keta and Axim.

Participants would deliberate on how to protect the coastlands through the identification of early warning signs at the coastal zones and come out with the appropriate responses to address the situation in case of a disaster.

Dr Aheto called for high-tech solutions such as installation of early warning systems and the use of sophisticated satellite technologies as well as localised solutions as a means of mitigating disastrous occurrences in coastal areas.

He said climate change would impact more on the poorest and most vulnerable countries with projections for Africa to include average temperature increase from 1.5 to 4 degrees Celsius, higher than the reported global average of 0.5 degrees Celsius.

Dr Aheto said projections by the International Panel on Climate Change (IPCC) indicated that if emissions continued to rise at their current pace, the world in general would be faced with serious consequences such as sea-level rise, shifts in farming season, biodiversity loss as well as increased frequency and intensity of extreme weather such as heat waves, storms, floods and drought.

He said there were also indications that poor countries in Africa would be most affected by climate change impact even though the largest share of historical and current global emissions of greenhouse gases originated in developed countries.

Dr Aheto said studies further indicated that for every one meter rise in sea level, an area of about 1,100 km of coastal area would be inundated and this could have grave implication since one-third of Ghana’s population lived within three kilometers of the coastline.

“Climate variability in Ghana will, therefore, have adverse effects on coastal communities” if national activities did not give sufficient priority to climate change issues.

Dr Aheto said Ghana was one of the countries in the West Africa whose economy was highly dependent on climate sensitive sectors such as health, energy, agriculture, water resources, land, fisheries and forestry.

He called for the acquisition of larger drones to enhance the building of better images that could help protect the coastal lands as well as the training of the human resource who would effectively manage the drones.

Mr Jose de la Maza, a consultant with the World Bank, said the Bank recognised the important role the coastal zones played in the livelihood of inhabitants and that it was committed to protecting the coastlands from further erosion and destruction.