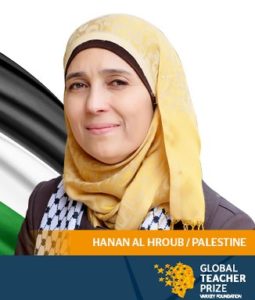 The winner of the Global Teacher Prize 2016, Hanan Al Hroub, has urged Ghanaian school pupils and parents to nominate their most inspirational teacher to win next year’s prize.

According to the Varkey Foundation, Hanan Al Hroub believes a Ghanaian teacher stands a great chance of winning in 2017, as Africa was shortlisted this year.

“I encourage parents and pupils to think about the positive teacher role models here in Ghana that are making a difference to children whose lives have been torn apart. Without their human intervention, innovation and inspiration these children would have no hope. If a Ghanaian teacher isn’t nominated or doesn’t apply then they can’t get the recognition they deserve,” she was quoted as saying in a statement by the Varkey Foundation.

The $1 million award, widely referred to as the Nobel Prize for teaching, is the largest prize of its kind and was established to recognize one exceptional teacher who has made an outstanding contribution to the profession as well as to highlight the important role of teachers in society.

Out of 8,000 teachers from 148 countries around the world, Ayub Mohamud, a Kenyan business studies teacher at Eastleigh High School in Nairobi was among the top 10 selected for this year’s prize.

Ayub Mohamud who is said to be passionate about innovation, design and creativity and tries to equip students with the skills to become successful social entrepreneurs, was quoted as saying:

“I encourage parents and pupils to think about the positive teacher role models here in Ghana that are making a difference to children whose lives have been torn apart. Without their human intervention, innovation and inspiration these children would have no hope. If a Ghanaian teacher isn’t nominated or doesn’t apply then they can’t get the recognition they deserve.”

Ayub is said to have taught children from traditional herding communities in rural Kenya, impressing upon them the need for education. He is also credited with being active in combating extremism and radicalisation on both local and national levels, and developing a lesson plan teachers can use to incorporate de-radicalisation messages into key subjects such as Islamic Religious Education.

The Varkey Foundation said if Ghanaian teachers apply, or are nominated, they could be potentially shortlisted as top 50 candidates later in the year and their inspirational stories publicised, helping to raise the bar of respect for the profession.

The public can nominate a teacher, or teachers can apply themselves by filling an application form at globalteacherprize.org by October 4, 2016.

The Foundation said applicants for the Global Teacher Prize 2017 will be shortlisted down to a top fifty and then a final ten, which will be announced in February 2017, from which the winner will be chosen.

All ten finalists will be flown to Dubai for an award ceremony taking place at the Global Education and Skills Forum in March 2017 where the winner will be announced live.