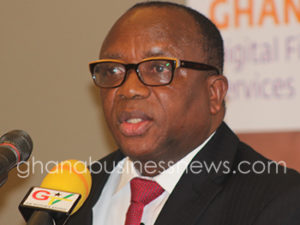 By December 2015, mobile money transactions in Ghana have increased to GH¢547.9 million from GH¢223.3 million in 2014, the First Deputy Governor of the Bank of Ghana, Mr. Millison Narh has said.

Speaking at the launch of a four-year Ghana Digital Financial Services Initiative in Accra, Wednesday June 8, 2016, he indicated that for the central bank, financial inclusion is important for a number of reasons.

Among others, he said financial inclusion and financial development have impacts on poverty reduction and economic growth.

“Secondly, financial inclusion is expected to alter the behaviour of consumers and firms which in turn incluence the effectiveness of monetary policy,” adding that “greater financial inclusion makes interest rates more effective as a policy tool and facilitates the central bank’s efforts to maintain price stability,” he said.

Citing the 2015 Global Index Survey, he said Ghana has made significant progress in promoting financial inclusion since the previous survey.

According to Mr. Narh, the Bank of Ghana’s interventions with some policy responses since the two Global Index Survey’s were done have enhanced financial inclusion in the country.

“Notable among these policy actions, were a new national Payment Systems Strategy, which seeks to promote bith the use of electronic payments over cash, and financial inclusion; and Electronic Money Issuers and Agent Guidelines aimed at promoting safe and secure issuance and acceptance of digital money as a means of promoting financial inclusion,” he said.

Mr. Narh states that “the effect of these two policy actions of the Bank has resulted in marked increases in mobile money transactions within the past three years. The amount of mobile money float balances with partner banks was GH¢223.3 million in 2014 compared with GH¢547.9 million in December 2015.”

There are 11 million registered users of the mobile money platform, but only 3 per cent are active in mobile banking, there are still some 42 per cent of the population that is unbanked.

The $5.6 million Ghana Digital Financial Services Initiative launched today is a joint programme by the International Finance Corporation (IFC), a member of the World Bank Group, the State Secretariat of Economic Affairs of Switzerland, SECO, and the Consultative Group to Assist the Poor, CGAP.

Funded by SECO, it will be implemented by the IFC and CGAP in collaboration with the Bank of Ghana and the financial industry.

The programme will support regulatory and market capacity, and provide direct technical assistance to two industry actors to increase the reach of digital financial services in support of inclusive economic growth, the IFC has said.

By Emmanuel K Dogbevi
Copyright © 2016 by Creative Imaginations Publicity
All rights reserved. This news item or any portion thereof may not be reproduced or used in any manner whatsoever without the express written permission of the publisher except for the use of brief quotations in reviews.