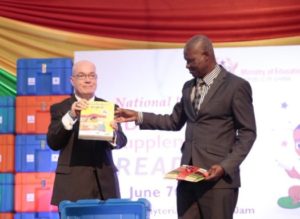 The Ministry of Education, in partnership with the United States Agency for International Development (USAID), has begun the distribution of more than four million books in English and Ghanaian languages to public primary schools.

The books are expected to improve the reading skills of nearly 2.8 million kindergarten and lower primary pupils across the 216 districts of the country and enhance education policies and management systems.

Officials who performed the launch on Tuesday said the move would further enrich the reading environment and boost capacity of school authorities to promote reading and expand pupils’ accessibility to reading materials.

“A literate, educated population drives development and builds nations, but a 2013 test showed that the vast majority of Ghanaian primary school pupils are unable to read with fluency,” he said.

“I am happy to report that this is changing. One of the major drivers of this change is the strong partnership between the U.S. Government and the Ghana Ministry of Education,” Mr Jackson said.

The USAID and the Ministry of Education had previously launched the ‘Partnership for Education and Learning’ project in 2015 based on which studies were conducted to ascertain factors that influence how well children can read.

Mr Jackson said USAID also aimed to train more than 50,000 teachers and improve the reading skills of more than 2.8 million Ghanaian pupils within the next five years adding that the partnership was yielding the expected outcome.

“I have already been humbled to see the fruits of our close partnership with the Ministry of Education. We have provided more than 450,000 books to upper primary students, and trained more than 18,000 teachers to use these new books to improve literacy.”

“We worked together to draft the Education Decentralization Bill, which is on its way to becoming law,” he said.

Dr Jacob Korr, The Ghana Education Service Director General, said: “With access to more reading materials in Ghanaian languages and English, pupils will then practice reading and have skills that will strengthen them to learn better.”

The 2013 early grade reading assessment report states that “in general only the top two per cent of pupils or fewer, were able to read with fluency and comprehension.”

The government wants to change that alarming statistic and turn 80 per cent of early grade children into readers, Dr Korr said.