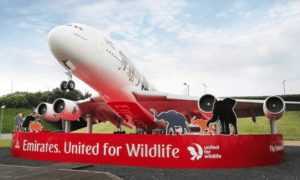 Emirates Airlines, has unveiled its fifth A380 emblazoned with special livery in support of United for Wildlife to fight against illegal wildlife trade, which poses a threat to the survival of some animals.

A statement copied to the Ghana News Agency said the fifth A380 unlike previous versions is situated at the traffic roundabout leading to the Heathrow Airport, which is a highly site that reaches more than million international travellers and their families and friends annually.

It said the model was built to an exact 1:3 scale of the real A380 aircraft and weighs more than 45 tonnes, making it one of the largest known aircraft models in the world.

Sir Tim Clark, President of Emirates Airline said: “The illegal wildlife trade has brought many of our planet’s most majestic animals to the brink of extinction.

“It is unthinkable that a generation from now, there may be no more rhinos, elephants or tigers to be found in the wild, the need for action is urgent, both the demand and supply side of the illegal wildlife trade has to be tackled.’

“Through our global brand footprint, Emirates can help drive consumer awareness and interest in the issue and as the world’s largest international airline, we believe we can make a difference to help break the supply chain of illegal wildlife trade, we will continue to do all we can in this regard.’’

Sir Tim, who is also a member of the United for Wildlife Transport, signed the landmark Buckingham Palace Declaration on behalf of Emirates.

The Declaration which was developed by representatives from across the transport industry outlines key actions to strengthen defences against trafficking by removing the vulnerabilities in transportation and customs that criminals are currently exploiting.

It urged Emirates customers worldwide including Ghana to use the unveiling of the A380 model aircraft to spread the awareness on the illegal trade of wildlife and also refuse products that have been made from endangered species.

It said in addition to consumer awareness efforts, Emirates has banned trophy shipments and is currently collaborating with international organisations to train and better equip its ground and cargo staff to detect and deal with illegal wildlife products in transit.

Facebook Twitter WhatsApp LinkedIn
2016-06-05
Emmanuel Dogbevi
Previous My petition was to attack the disciplinary committee – Afoko
Next Ghana’s mineral revenue falls to $3.39b in 2015