June 3, 2016 Politics Comments Off on EC asked to rethink decision on polls day 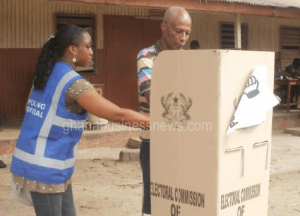 The Electoral Commission (EC) has been urged to reconsider its decision to change the day for the general election from December 07 to November 07.

Professor Alexander Ayogyam, Director of Research at the Kumasi Polytechnic, second guessed the timing Ghana’s election to coincide with that of the United States (US) and said that could prove to be a bad judgement.

The international spotlight, he noted, would be taken away from the country’s polls.

“The international community’s attention would be on the US election than any other election.”

This was contained in a statement, he issued in a Kumasi, a copy, was made available to the Ghana News Agency (GNA).

He pointed out that international monitors over the years had helped to provide a seal of credibility to country’s presidential and parliamentary elections – something that needed to be sustained.

Prof Ayogyam said he found it difficult to rationalize why the EC this time around was doing everything possible to divert international attention.

“The EC must know that, if the beauty of election 2016 is marred, the blame would be at their door step because of the date they have chosen”, he add