May 27, 2016 General News Comments Off on Children in Ashanti stunting from poor nutrition 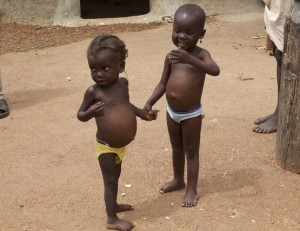 Ashanti Region is reported to have high prevalence of micro-nutrient deficiency cases among children under five years, resulting in stunting in many of the children as they lack vital vitamins and nutrients for normal growth.

The 2014 Demographic Health Survey by the Ghana Health Services (GHS) estimated that about 111,059 children under five years in Ashanti suffer from stunted growth, the second highest after the Northern Region, which recorded 118,427 cases.

Dr. Mrs. Stella Ama Ennin, Director of Crops Research Institute (CRI) of the Council for Scientific and Industrial Research (CSIR), said this was worrying and that tackling it should be made an urgent priority.

She raised the concern in a speech read on her behalf at a food fair organized jointly by the CRI and International Institute of Tropical Agriculture (IITA) to promote the consumption of staple crop varieties enriched with vitamin ‘A’.

The fair was held in Kumasi, under the theme “Building livelihoods on bio-fortified staples” and attracted food processors, farmers, agricultural researchers, scientists and school children.

Dr. Ennin said the CRI had scaled up efforts at encouraging the consumption of staple crops with high vitamin ‘A’ concentrate including orange-fleshed sweet potato, bio-fortified cassava and maize varieties.

She stated that the IITA under its “HarvestPlus project” had funded the breeding of bio-fortified maize and cassava, with a total of six bio-fortified cassava varieties so far released and being tested by the CRI and related research institutions in Ghana.

Mr Edward Carey, a sweet-potato breeder of the International Potato Centre, an international body promoting the consumption of orange-fleshed sweet potato, said vitamin ‘A’ deficiency was to blame for the high rate of night blindness and impaired growth in Sub-Saharan Africa.

He announced that under the “Sweet potato for profit and health initiative”, a coalition of partners, was working to improve the lives of 10 million households in 17 sub-Saharan countries by the year 2020.

In Ghana, 460,000 households have been targeted by the initiative.

Ghana Health Service, Ministry of Food and Agriculture (MoFA), the Universities, CSIR institutes including the CRI and the International Potato Centre (CIP) are the coalition partners.