For centuries, the economies of African countries have been made dependent on advanced economies, and despite the enormous amount of natural resources in Africa, over 500 million citizens continue to live in poverty.

It is not any different with the mining sector either.

Jean Noel Francois, the Acting Director, Department of Trade and Industry at the African Union (AU) Commission said at the second conference of African Ministers responsible for mineral resources and development December 12, 2011 in the Ethiopian capital Addis Ababa, that even though Africa’s mineral resources are fuelling growth and development in many industrialised and emerging economies of the world, Africa still remains poor, under-developed and dependent on donor assistance for national budget support.

He further reiterated the fact that Africa consumes very little of its own mineral resources and exports most of it as raw materials, “with little or no local value addition and beneficiation.”

Dr. Stephen Karingi of the Economic Commission for Africa (ECA) cited figures showing how much the mining companies are making in Africa. “The figures are there for all to see,” he said, “in 2010 alone, net profits for the top 40 mining companies grew by 156 per cent to $110 billion and the net asset base of these companies now exceeds $1 trillion.”

“The formula for the wealth of nations is clear: rich nations add value to exports, poor nations export raw materials,” he said.

Citing the cocoa sector as an example, he said while Africa accounts for 75 per cent of the global production of cocoa, the continent reaps only 2 per cent of the $100 billion annual market for chocolate.

“This model can no longer create the desired wealth for Africa. Africa must no longer be stuck at the bottom of the value chains. Africa must now rapidly diversify its export mix and add value to all of its raw materials by developing efficient and competitive value chains. This is especially critical, as Africa only accounts for 1.9 per cent of global value added in manufacturing, and this has not changed for decades. It is now time to industrialize Africa,” he said.

The AfDB, which is one of the financiers of development in Africa, loaned $9 billion to African countries in 2015.

Announcing that it is leading the charge to industrialize Africa, the Bank says it will triple its climate finance on the continent to $5 billion annually till 2020.

“We supported the Noor complex, the world’s largest concentrated solar power plant in Morocco with capacity to provide power for over one million homes by 2018. The Bank financed the power interconnection to link Ethiopia, Kenya and Zambia, expanding regional power pools. In December 2015, we provided $138 million to finance the Ruzizi III 147 MW power plant, to provide electricity to Rwanda, Burundi and Republic of Congo,” Adesina said.

The Bank also says it intends to support digital literacy, logical thinking and computational skills in secondary and primary schools through its Jobs for Africa’s Youth Initiative.

“We will also support coding academies that will drive advanced computational skills for employment focusing on youths in universities and polytechnics. Through our Boost Africa Initiative, with our partners, the European Investment Bank, private equity funds will be established to help boost businesses of young people. We plan to leverage $5 billion to support businesses of young African entrepreneurs. Our goal: create 25 million jobs for the youth, over a ten-year period, in agriculture, ICT and other sectors,” he added.

The Bank’s efforts and initiatives must however, be complemented by governments of the individual African countries. Most African governments lack the political will to take decisions that would cascade into economic benefits for most of their citizens. The evidences of mismanagement in countries of the continent are numerous. There is corruption and illicit financial flows out of the continent, which is costing Africa about $60 billion every year in lost funds.

The activities of multinational corporations have been identified to be responsible for 60 per cent of the outflows, while criminal activities such as human trafficking and money laundering drive 35 per cent, corruption plays a five per cent role in shifting all these money out of the continent.

While global volumes of illicit financial flows reportedly reached $1.1 trillion in 2013, the developing world lost $7.8 trillion between 2004 and 2013, the last year for which data are available, according to the Global Financial Integrity (GFI), a Washington DC-based research and advisory organization.

The report also found that sub-Sahara Africa is the hardest hit region suffering the largest illicit financial outflows—averaging 6.1 per cent of GDP.

Curiously, when the so-called Panama Papers were published majority of the individuals and companies in the papers were 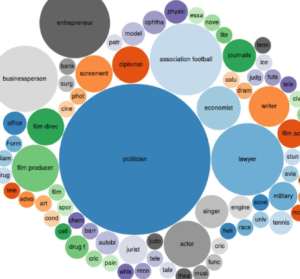 politicians or connected to them. An infographics (right) put together by Gerard Meijssen highlights that.

African countries must break the jinx, be bold and shed the negative attitudes leading to self-inflicted and self-destructive needless poverty. The ignoble face of cronyism and corruption must be tackled headlong.

It is important to seal the holes through which all the funds are leaving Africa, and committing to and actualizing beneficial ownership registers are the ways to go. So far, only South Africa has committed to doing that.

While in Africa about 70 per cent of the people are engaged in agriculture, most citizens are hungry and malnourished.

The AfDB says it is attacking malnutrition too.

The Bank says its Vice Presidency for Agriculture, Human and Social Development will drive its “Feed Africa” agenda, with a major focus on transforming agriculture into a business for farmers across African countries.

“Our goal is clear: achieve food self-sufficiency for Africa in ten years, eliminate malnutrition and hunger and move Africa to the top of agricultural value chains, and accelerate access to water and sanitation,” Adesina said.

Africa must rise to the occasion, her long suffering people deserve better.