May 24, 2016 Sports Comments Off on Hearts of Oak maintain lead as Kotoko and Aduana pile on pressure 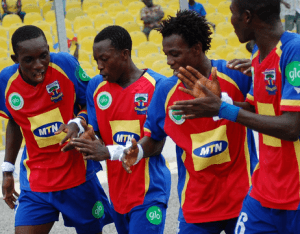 Accra Hearts of Oak continued their fine form this weekend by holding Aduana stars to a 1:1 draw game at the Dormaa Park to maintain the top position as Kotoko and Aduana follow closely after 13 games in the ongoing Ghana premier league.

Hearts came from behind to salvage a draw from the free scoring Aduana Stars team to consolidate the top spot to deny Aduana stars the needed victory to climb up to the top position.

Kumasi Asante Kotoko, who had a shaky start to the ongoing league under former coach David Duncan have picked themselves up from the bottom of the league table to occupy the third position under interim coach Michael Osei.

Hearts of oak, who has lost two, drawn four and won seven out of the 13 matches played so far, has scored a total of 16 goals and had conceded10 with 25 points.

Aduana Stars had scored 13 goals and conceded only one at home before the Hearts of Oak game but had their chance of climbing to the top of the league was thwarted by the league leaders leaving them at the second position with 23 points from 13 games. Aduana had won seven, drawn two and four loses with 19 goals scored and conceding nine.

Kumasi Asante Kotoko at the Baba Yara stadium had to fight hard to close the gap on their arch rivals Accra Hearts of Oak after an Amos Frimpong penalty  kick goal earned them all three valuable points over Inter Allies, who has won only two matches after 13 games with 11 points and lying 15th on the league table.

Kotoko. who has had their fortunes turned around by their former player and now interim Coach Michael Osei has won seven matches, lost four and drawn two with 13 goals to their credit and conceded nine with 23 points to occupy the third spot on the league table after 13 games.

Both Kotoko and Aduana Stars have 23 points apiece but Aduana are lying second with a superior goal difference and would pile more pressure on Accra Hearts of Oak who play at home this Wednesday in a local derby with Liberty Professionals behind closed doors.

Ebusua Dwarfs and Wa All Stars will welcome Aduana Stars and Kumasi Asante Kotoko respectively in the week 14 mid-week encounters.

The first round of matches will come to an end on Saturday with the current league leaders travelling away to Dawu to play Dreams FC as Aduana and Kotoko will be at home to welcome Bechem united and Techiman city respectively.