May 18, 2016 Politics Comments Off on Abuakwa North gets new MP 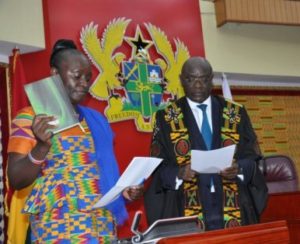 Mrs Gifty Twum Ampofo, a teacher, has been sworn into office as the New Patriotic Party Member of Parliament for Abuakua North, when Parliament reconvened for a nine-week sitting.

The Speaker of Parliament, Edward Doe Adjaho, administered the requisite oaths to Mrs Twum Ampofo, who was elected in a by-election recently to replace Mr Joseph Boakye Danquah-Adu, who was murdered at his Shiashie residence in Accra, on February 8. 2016.

After swearing her into office, Mr Adjaho urged Mrs Twum Boafo to fill the large footprints of her immediate predecessor, extolling him (J.B. Danquah-Adu) for his peaceful demeanour and unifying approach to issues.

Mr Adjaho asked the legislator to learn quickly the expertise of the older lawmakers and adapt to the work and proceedings of the House.

The Majority Leader Alban Bagbin, commended the female MP on her entry into the August House and urged her to discharge her responsibilities creditably.

The Minority Leader, Osei Kyei-Mensah-Bonsu, for his part, advised the debutant MP to apply herself strictly to the Constitution and the Standing Orders of the House.

The Business in the House, which reconvened for the Second Meeting of the Fourth Session of the Sixth Parliament of the Fourth Republic, is expected to be very hectic as the lawmakers complete a large list of items on its agenda ahead of the November 2016 General Election.

The Sixth Parliament is expected to end by the close of July 2016.

Ms Kate Addo, the Deputy Director of Public Affairs in Parliament, said the House would consider a number of Bills, some of which were already at the Committee level.

About 29 Bills would be tabled before the House.

The House would also continue to deliberate 10 Bills that are at the Consideration stage, some of which are: Conduct of Public Officers Bill, 2013; Intestate Succession Bill, 2013; Right to Information Bill; 2013; Banks and Specialised Deposit-Taking Bill, 2015; Chieftaincy (Amendment) Bill, 2013, Plant Breeders Bill, 2013; and Ghana Deposit Protection Bill, 2015.