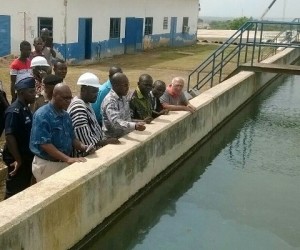 Dr Kwaku Agyemang-Mensah, the Minister of Water Resources Works and Housing, has resolved to ensure that the delayed Winneba Water Expansion Project is completed on schedule.

Speaking to journalists after inspecting the ongoing project, the Minister explained that the delay of the expansion work which is creating acute water shortage in the area, needs urgent attention.

He said in order to ensure that the work is completed on time, stakeholders involved have been summoned to the ministry to address the challenges.

“Government is fully committed to ensure that all the three major projects are completed on time to serve the people,” he said.

He said President John Dramani Mahama, is determined to provide quality drinking water to Ghanaians and the Ministry is committed to ensure that the goal is achieved.

The Resident Engineer of the Winneba Water Expansion Project, Mr Evans Norgbey also gave the assurance that the deadline would be met.

Dr Agyemang-Mensah also visited the Essakyir Water Project and expressed satisfaction about the work being done.

Nana Amoasa Buabeng Otsaba IV, Chief of Gomoa Antseadze, pleaded that the name of the Water Project be changed since it is not located on Essakyir lands and the minister promised to address the concern of the chief.