Ghana to save $200m yearly with single window system at ports

May 16, 2016 General News Comments Off on Ghana to save $200m yearly with single window system at ports 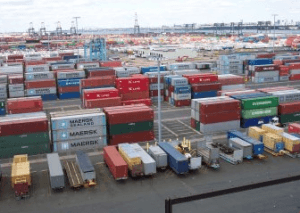 Ghana expects to make annual savings of about $200 million with the establishment of the single window system at the ports.

The National Single Window system is said to have begun yielding positive results, as the Customs Division of the Ghana Revenue Authority exceeded its revenue target for last year, following significant improvement in the processes at the port.

This compared to 200 Final Classification and Valuation Report (FCVR) being processed by the five Destination Inspection Companies in the past.

Mr Akurugu was speaking at a day’s training programme for members of the Journalists for Business Advocacy (JBA) to sensitise and enhance their understanding of the operations of the single window system.

Specifically, the training examined the operations of the single window system, the impact on the processing of trade documents and the contribution it is making to national revenue generation.

Mr Akurugu said there had been considerable improvement in the turnaround time as documents are processed within 48 hours as opposed to between five and 10 days under the previous regime of the Destination Inspection Companies.

The National Single Window was initiated in 2015 by government to among others facilitate the harmonisation of trade processes within the various agencies to ensure smooth import and export business.

It allows Ghanaian importers and exporters to electronically lodge their documents, including customs declarations, certificates of origin, invoices at a single location to be accessed by all regulatory and trade agencies, instead of sending copies of the same documents to different agencies.

It provides the necessary technical, architectural and administrative support for Ghana customs to take over the pre arrival classification and valuation process for import and export.

“The PAARS has significantly reduced the time and cost of doing cross border trade in Ghana. Previously, it takes an average of two weeks for trade documents to be processed; the PAARS implementation has cut processing time for complaint cases to two days and in some cases two hours,” Mr Akurugu said.

It allows the various institutions, including the Foods and Drugs Authority, Ghana Standards Authority, involved in trade and transport to lodge standardized information and documents with a single entry point to fulfil all import, export and transit related regulatory requirements.

She said the seminar would provide the opportunity to understand the national single window system and the benefits it holds for the country when fully implemented.

She said some of the benefits of the Single window include enhanced trade facilitation, faster processing of CCVR, effective integration and risk management environment and reduction in revenue loss.

“The National Single Window will ensure a transition from the culture of delay and high cost of doing business to a culture of faster, simpler, automated and predictable means of processing imports, exports and transit in the country,” she added.

Mr Suleiman Mustapha introduced the JBA to the management of West Blue, spelling out its main objective of advocacy for the sustainability of Ghanaian businesses.

He said campaigns for the growth of the businesses are done with the view to bring to the fore the challenges, be it policy issues, that inhibit expansion of the companies and liaising with duty bearers to find solutions that would inure to the benefit of the businesses.

Mr Uthman Oluwatoni Aminu, an official of West Blue said a Single Window is built on the concept of a one-stop shop for the exchange of information between traders and government agencies, thereby reducing the complexity, time and costs involved in international trade.

It would also cure the bureaucracy in the system by reducing the human interface, increase transparency, fast processing and reduce cost.

He said with the single window system the goal is to enhance Ghana’s trade competitiveness by 50 per cent within the next five years while the country would save not less than $200million annually.