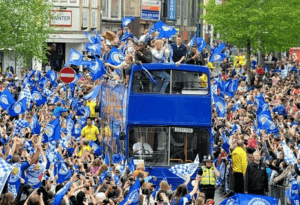 Leicester City unexpectedly winning the 2015/2016 English Premier League title has led to betting shops (bookmakers) paying out some £25 million to gamblers who placed bets on the unfancied team on odds of 5,000-1 at the start of the season last August.

Those who were bold enough to back a team that escaped relegation from the Premier League last season won on average £100,000.

One 20-year-old female Leicester supporter who placed a £2 bet on her team in August was celebrating her £10,000 win with other fans in bars and pubs in the English East Midlands city.

Unlike one-off sporting upsets, Leicester’s success was sustained over a long period and when many felt they would not maintain their charge towards the title, as the big four – Manchester City, Manchester United, Chelsea and Arsenal – continued to snap at the heels of a team that cost just £55 million – less than a fourth of the value of these challengers.

He said: “It’s a fairy tale. It’s one of these beautiful stories that only football can write and that nobody would have believed possible at the beginning of the season.”

When Claudio Ranieri took over as manager before the start of the current season, his pep talk to his players was for them to gain enough points to get out of the relegation zone.

And that was how the Leicester surge began.

Without the pressure of thinking about winning the title their game was relaxed and each player contributed solidly to the team effort.

They defended, attacked and chased in the midfield in a dogged fashion to become the toast of people around the world who love to support sporting underdogs.

Leicester’s top scorer, Jamie Vardy, had never played league football before – having being bought from non-league Fleetwood Town for £1 million, which allowed him to give up his part-time job as a technician.

French-born Algerian midfielder Riyaz Mahrez was signed from French Division Two side Le Havre for £400,000 – less than what Wayne Rooney earns in a month at Manchester United.

The club’s Thai owners have awarded 64-year-old Ranieri a £5 million bonus while the players will have a share of a £6.5 million pot.

Former skipper of the Black Stars, Asamoah Gyan says he has been training to get …