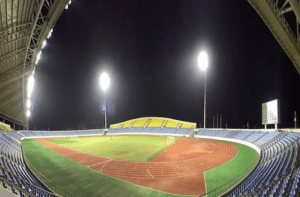 President John Dramani Mahama On Tuesday announced that by the end of 2020 five modern Stadia would be built in five regions in the country to enhance sports development.

He said the Volta, Upper East, Upper West, Eastern and Brong- Ahafo would be the beneficiaries regions.

The President said to ensure the proper maintenance of the facility a separate account would be opened by the Ghana National Sport Authority to see to the management and maintenance of the stadium so that it does not deteriorate like other stadia.

He described the stadium as a unique and first multipurpose stadium to be constructed in the country since it has all the sporting equipment available for use and would go a long way to enhance sports development in the region.

President Mahama commended the Chinese government for the gesture, adding that it symbolises the 50- year China-Ghana relationship.

He said the completion and inauguration of the stadium was to fulfill his promise to the people of the Central Region to complete all the projects started by the later President John Evans Atta Mills.

He said the construction of the stadium and the new Kotokuraba market are the two special projects the Chinese government pledged to fund when the late President visited China in 2010.

The Minister of Youth and Sports Nii Lantey Vanderpuye lauded the efforts of the Chinese government, and all the stakeholders whose effort has yielded the beautiful edifice.

He however expressed concern about the lack of maintenance culture of the country and gave the assurance that “not only will we manage the stadium but we will also fix the others that have gone bad”.

The Chinese Ambassador, Madam Sun Baohong said the newly built stadium which looks like a shell sleeping on the beach or white sail in the sea perfectly matches how beautiful Cape Coast is.

She said the facility would further promote the development of sports in Ghana, enhance the capacity of the country hosting major sports events, diversify the cultural and sports life of the people as well as stimulate the economic development.

She said the key to sound relations between countries lies in the affinity between their people which she noted largely stems from mutual understanding.

She mentioned the National Theatre, Office complexes of the Foreign Ministry and Defence Ministry, the expansion project of the new century training institute as well as University of Health and Allied sciences as some of the Chinese aided projects in Ghana.

She said in the Central Region her government also implemented the Awutu Senya D/A Junior High School Expansion Project and also set up the Chinese Ambassador Scholarship programme in the University of Cape Coast UCC).

She said the second Confucius Institute in Ghana would be inaugurated in the UCC this month.

She announced that to support soccer in Ghana, the Chinese football Association donated 300 footballs to the Ghanaian schools.

The Regional Minister, Mr George Kweku Ricketts-Hagan said the stadium is one of the numerous development projects the people of Cape Coast are getting form the government.

She said the Kasoa Interchange, Kotokuraba Market, Komenda Sugar factory, Cape Coast Water Project and seven senior high schools are the other projects the region is benefitting from the Chinese government

Osabarima Kwesi Atta II, Omanhen of Oguaa, who chaired the function also commended the Chinese government for the facility and expressed the hope that it would go a long way to enhance business, improve upon the health of the people and serve as a training ground for many schools in the region.

In a friendly match between the Ghana Black Satellites and China U-19 football team yielded 2-2 draw game.

Both sides played a yeoman game in the first half with both wasting beautiful chances to score until in the 48th minute when China scored the match opener through a corner kick.

The Ghanaian side mounted pressure and got the equalizer in the 56 minute and went ahead to increase the tally in the 76 minute, but Chinese made a drawn game in the dying minutes when they scored  their second goal two minutes into extra time.

In a curtain raiser Ebusua Dwarfs and Vipers played a determined match, drawing 1-1 at the end of proceedings.

The AfDB Annual Meetings: To look at energy and climate change in Africa