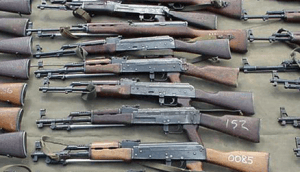 The Economic Community of West African States (ECOWAS), is working on a strategy to deal with the menace of Small Arms and Light Weapons (SALW) in the sub-region.

This has become necessary because of the increasing presence of SALW in the hands of non-state actors and the attendant implication for peace and security in the region.

Pursuant to this, ECOWAS in conjunction with its development partners held the third Steering Committee meeting of the ECOWAS-EU Small Arms Project last April to evaluate the implementation of the project in 2015 and assess the progress made so far on the approved project work plan.

The implementation of the project, which is a pilot weapons collection programme, is very crucial to meeting the challenges posed by the prevalence of SALW in the region and the determination of the regional group to fashion out a sustainable way forward.

Opening the meeting in Abuja, Nigeria,  ECOWAS Commissioner for Political Affairs, Peace and Security who was represented by the Director, Peace keeping and Regional Security Dr Cyriaque Agnekethom noted that the meeting, which was called just before the commencement of the United Nations programme on small arms, would allow stakeholders to make a few decision on the issue of mobilizing resources.

He added that the meeting came at a time when the ECOWAS has entered a fresh Indicative Programme with the EU, the major funding partner.

Dr Agnekethom said ECOWAS expressed worry about the continuous flow of SALW to sustain conflict “not only Nigeria and Mali but also Burkina Faso and Niger. Now we do not know which country would be next…And this is now being compounded by piracy and urban criminality in the region”.

He expressed the need for the review of what has been done so far before heading to the last phase of the project.

Dr Agnekethom said that progress is being made in the fight against the menace as ECOWAS and her partners are working together in the area of coordination and exchange of information and strategies, expected to lead to positive steps in the next phase of the project, which is arms collection and destruction.

Pa Lamin Beyal, the UNDP Country Director, pledged the support of the UN’s global development agency to the work that is being done in ECOWAS member states in aid of peace and stability.

He said that the people of the region need to get together  to rid the area of small arms threat.

Participants raised concerns on the need to move from good intention to concrete action, noting that conflicts between herdsmen and host communities are now getting out of hand particularly in countries such as Nigeria.

Deliberations also centred on the issue of the extra cost brought about by the extra volume of work, as well as the procurement and deployment of equipment for the destruction of weapons since the projects were trans-boundary.

The implementation of the ECOWAS-EU small arms project, which relates to the ECOWAS Conflict Prevention Framework component and practical disarmament in Member States was launched in 2014 in seven beneficiary countries.