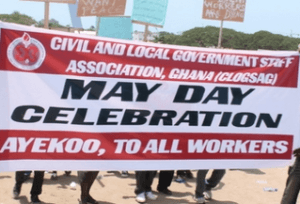 The Greater Accra Regional May Day celebrations held in Tema was nearly marred by a stampede caused by anxiety and exhaustion among the workers.

Workers had gathered at the Tema Sports Stadium as early as 7am only for the programne to start after 9 am.

The workers,obvoiusly, tired could no longer bear the long speeches hence surging towards the stage putting enormous pressure on the few security men around.

In an interview with the Ghana Agency, ASP Atuluk, Head of operations of the Tema Regional Police Command, observed that incident was natural and could only be handled with extreme caution.

Responding to whether poor planning led to the ravaging of the place, the Police Officer noted that they deployed eighty officers to the grounds but some of them had to monitor the parking areas to avoid stealing and other criminal activities.

“This is how come some of our men were not seen on the parade grounds,” he said.

Again, he noted, that the number on the grounds were few because others were monitoring the traffic that was created in front of the Tema stadium where the event was held.

Naa Ayeley Sekyireh, the Greater Accra Regional Secretary of the Ghana Trades Union Congress ( TUC), was of the opinion that the surging forward of the workers was a normal occurrence during such celebrations.

She believed that it took nothing away from the beauty of the ceremony.

Nii Laryea Afotey Agbo, the Greater Accra Regional Minister, who sat through the commotion calmly, congratulated the workers for their contributions to the development of the economy.

He appealed to the workers to work together to ensure a violent free elections come November.