Africa’s human capital and the need for capacity building 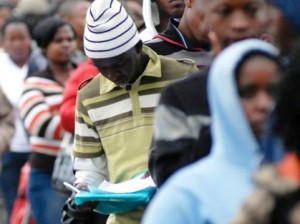 The mantra that Africa’s most valuable resource is the continent’s human capital, would not be meaningful if African citizens are mostly unskilled, because human resources without the appropriate skills undermine national development.

Africa is the second-largest and second most populous continent on earth with an estimated population of 1.033 billion people according to 2013 figures.

The need for developing the capacity of the continent’s growing population is now a matter of great need.

The African continent’s 40 million youth is said to be 60 percent of the continent’s unemployed. And the number of youth in Africa will double by 2045, according to the African Economic Outlook 2012.

The challenge of lack of capacity goes deeper than it is for the teeming youth of the continent; the case is even so for African institutions.

Most institutions in Africa lack the capacity to function fully, effectively and efficiently.

The lack of capacity for instance, in the case of tax collection is noted to have affected internal revenue generation on the continent, in spite of improvements.

According to the ‘2015 African Capacity Report’, a publication of the Africa Capacity Building Foundation (ACBF), despite improvements in domestic revenue collection in most African countries, tax collection remains low.

ACBF argues that despite significant improvements in revenue collection over the last decade from 2006 to 2015, the effective mobilization of domestic resources in African countries faces significant challenges, chief among them high capacity constraints and low tax collection efforts.

The report states that between 45 per cent to 50 per cent of the 45 countries surveyed have very high needs in building institutional and human capacity in almost all areas critical to ensuring effective and sustainable domestic resource mobilization (DRM): fighting illicit financial flows, revenue collection, fiscal sustainability, strengthening of the financial sector, fight against corruption and social security and safety nets.

The ACBF, established in 1991, is mandated to work to build human and institutional capacity for good governance and economic development in Africa.

In the coming days from May 3 to 5, 2016, the ACBF will be organizing the Third Capacity Development Forum in Harare, Zimbabwe.

About 500 delegates are expected to attend to discuss how to ‘Develop Capacity for Africa’s Economic and Social Transformation’.

Donor funding for education in Africa continues to fall – UNESCO

Misleading the flock in the name of religion