Extreme starvation, one of possible causes of snake invasion in Ejisu – Scientist

April 15, 2016 General News Comments Off on Extreme starvation, one of possible causes of snake invasion in Ejisu – Scientist 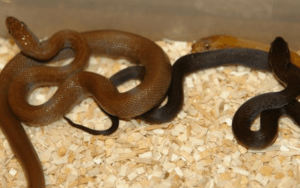 Dr. Bright Obeng Kankam, Senior Research Scientist from the Forestry Research Institute, Ghana (FORIG) of the Council for Scientific and Industrial Research (CSIR), has explained that extreme starvation was one of the causes of the recent massive invasion of snakes in the Essienimpong, Kwaaso and Piase communities near Ejisu in the Ashanti Region.

A document which summed up research findings conducted by Dr. Kankam with the assistance of Dr. Caleb Ofori Boateng, a Junior Research fellow at FORIG and copied to the Ghana News Agency, said the natural instincts for survival combined with two other scenarios flushed the reptiles, which feed on frogs, from their low-land, marshy or grassland natural habitat to upland areas in search of food.

The Scientist said the frog-food had gone scarce when the excessive use of glyphosate -containing herbicides by farmers killed the frog larvae in the swamps.

Dr. Kankam identified the snakes as White-lipped Herald Snake (Crotaphopeltis hotamboeia) and Striped House Snake (Boaedon lineatus) mostly found in areas around human dwellings where their habitats are not disturbed, may have migrated to upland settlement areas to enable them feed on lizards, geckos or mice.

In explaining the second scenario, he indicated that farmers left heaps of grass on their farms after cultivating their produce in the low land areas, which became a conducive haven for the snakes to lay their eggs.

“The long dry season is likely to have facilitated egg incubation which led to the mass hatching of a high number of eggs due to the favourable constant temperature under the heaps of grass”.

“The recent torrential rains that flooded the lowland area flushed the snakes out of the lowland forcing them to seek refuge in the upland human settlement area,” the scientist added.

The Researchers mentioned the close proximity of refuse dumps to the affected communities as the other scenario that may have attracted the snakes since refuse dumps are good breeding grounds for mice, the main food for the Striped House Snake.

Dr Kankam said though the bite of the non-poisonous snakes are harmless to humans they cautioned the public to handle them with care since a bite can inflict a deep puncture wound.

The communities have also been advised to use refuse receptacles for their garbage in order not to provide a fertile breeding grounds for the reptiles.

It would be recalled that about one-month ago, for four days running, residents of the said three communities in the Ashanti Region, were gripped with fear with the sudden massive invasion of snakes in their communities.