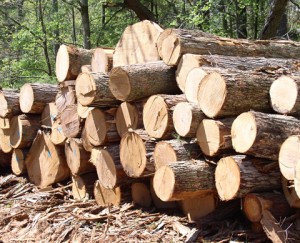 He said the national wood procurement policy, requiring that wood and timber products for government’s approved projects were procured only from legal sources, attested to this.

He was opening the ninth quadrennial delegates’ conference of the Timber and Wood Workers Union (TWU) in Kumasi.

“Overcoming the challenges in the wood and forestry industry, the role of stakeholders was the theme of the three-day meeting.

Mr. Akandoh again spoke of a wood tracking system under the Voluntary Partnership Agreement (VPA) with the European Union to make sure that only legally sourced wood was traded in both the domestic and export markets.

He identified illegal chainsaw operation and logging as a serious challenge to the forestry sector, which needed new strategies to effectively deal with.

The Deputy Minister said they would continue to initiate measures to restore the denuded forests, reduce pressure on the diminishing natural forest, bridge the increasing timber supply deficit and create wealth and employment opportunities in the sector.

He however, noted that, it would be difficult to achieve these without the active involvement of all stakeholders.

He gave high marks to TWU for initiating plantation development project as its contribution to restoration of the forest cover.

Mr. Kofi Asamoah, Secretary General of Trades Union Congress, faulted the state for not putting enough into reforestation programmes to get the degraded forests back and increase the forest stock.

The government must do more to encourage massive investment to rejuvenate the sector and act boldly to stop activities that posed threat to the forest.

Mr. Joshua Ansah, General Secretary of TWU, announced that the Union had established 240 hectares afforestation project at Kokoago, near Wenchi in the Brong Ahafo region to provide raw materials for the timber industry.

He said it was ready to support all initiatives aimed at rejuvenating the forestry sector to fight poverty and promote socio-economic development.

Mr. Alex Bonney, National Chairman of TWU, said most companies in the industry were currently operating below capacity because of the lack of raw materials, high cost of production resulting from high tariffs, increasing taxes, lack of credit facilities and high interest rates.

He stated that one of the major problems facing plantation development was funding and called on the government to provide the needed support to encourage plantation.